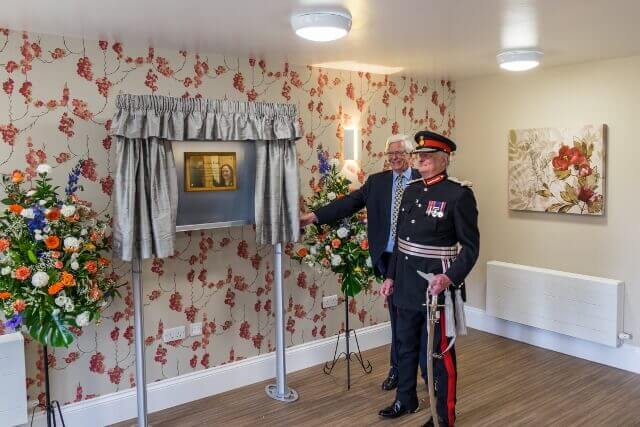 Together with The Abbeyfield Kent Society’s former Chairman, Bobby Barnes, after whom Barnes Lodge is named, The Lord-Lieutenant officially declared the flagship care home open on 31st March. Guests gathered at Barnes Lodge to toast the grand opening of the new Tonbridge care home, which recently opened its doors in Tudeley Lane. The Mayor of Tonbridge and Malling, Cllr Mark Rhodes and the Society’s Chairman, Zach Miles were also in attendance, along with Trustees and other friends of the organisation.

Lord De L’Isle spoke of the need for high quality housing for older people, and in the speech he delivered said:  “I pay tribute to Abbeyfield Kent which has its 50th anniversary in May, having grown from a single terraced home in Gillingham, to the biggest Abbeyfield Society in the world, and it is continually evolving to provide ever higher standards.”

Bobby Barnes shared his delight at Barnes Lodge being named after his significant contribution to the Society for more than 17 years. In his speech, Bobby said: “I am incredibly proud to have been given the very singular honour of having this building named for me. I say this because it represents all that is good about The Abbeyfield Kent Society in terms of its purpose, scale and even the fact that it is the first project built for us and to our specification but owned by others, Target Advisors, who have faith in us and in the Society’s future”.
Following the speeches and unveiling of a commemorative  plaque, guests were invited to take a tour of the building and view a number of the modern and homely bedrooms.
Barnes Lodge provides high quality care for older people with a variety of care and support needs. The beautiful new home features 101 spacious and well decorated bedrooms, all with en suite wet rooms, alongside an excellent range of communal facilities, including a library, hair salon, coffee shop and gardens.