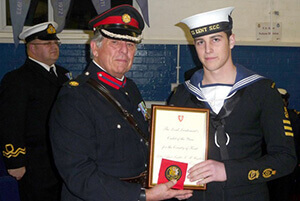 He had been appointed as the County’s Sea Cadet Corps Lord Lieutenant’s Cadet for 2010/11 but is now at Merchant Navy College and was unable to receive his certificate and badge earlier.

Making the presentation to PO Cadet Hughes, Colonel Duffield recalled attending his own Petty Officer’s course in the battleship HMS Vanguard in 1958. He went on to serve in the Royal Air Force, and completed his hat-trick of Services as an officer in Kent Army Cadet Force.