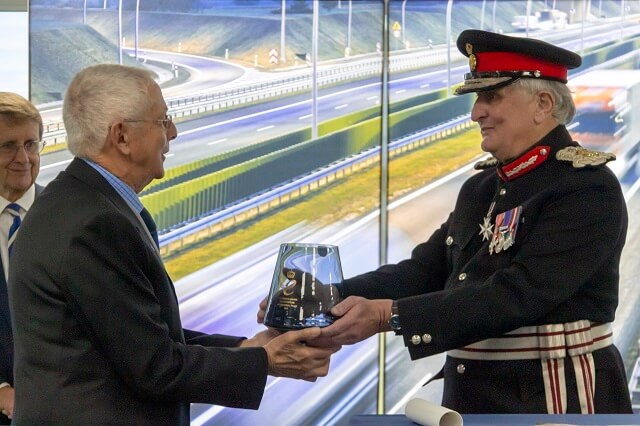 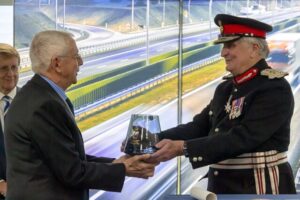 Brigade Electronics plc, a leading commercial vehicle safety supplier has been presented with the Queens Award for Enterprise in recognition of its international trade success, having been awarded the accolade earlier this year. The company was one of only three businesses in Kent to have received the award.

Chris Hanson-Abbott received the scroll and commemorative vase from the Lord-Lieutenant who complimented Brigade on its growth and said it served as an excellent example of a British company successfully trading within a global marketplace.

Formed in 1976, Brigade Electronics has been at the forefront of vehicle safety since 1976 having introduced the first reversing alarm into the UK. Since then the company has continued to develop life-saving products which are not only sold in the UK, but across the globe.

Over the years Brigade has evolved to become an innovator in its own right, inventing a more directional reversing alarm sound utilising its unique BBS technology that has won praise from the Noise Abatement Society.  New technologies such as a 360-degree camera system have also been developed to eliminate driver blind spots in HGVs.

Today, 43 years on, the company has grown to become a 200-strong business with a turnover of in excess of £50 million with export representing two-thirds of its business.

The Brigade success story all started when Chris Hanson-Abbott was walking down a Tokyo street 40 years ago when he heard a distinctive “beep beep” of a prototype reversing alarm on a truck. Hugely impressed, he tracked down its inventor, Matsusaburo Yamaguchi, and gained permission to import them into Europe. Recognising the huge potential for saving lives, Chris gave up his job as a shipbroker and launched Brigade Electronics. Today it is hard to imagine life without reversing alarms. They’re part of everyday life and a vital tool in safeguarding lives and preventing serious injuries.

“It has been a fantastic journey and we are incredibly proud to have received such a prestigious award in recognition of our international trade, which over the years has grown exponentially as safety both on the road and within the working environment becomes an ever-increasing priority. It has not however been a sole effort and our continuing success couldn’t have been achieved without the hard work and dedication of our team both in the UK and across the world.”

Never a business to stand still Brigade is now turning its attentions to combating the latest hazard on Britain’s roads – the quiet vehicle – which Chris Hanson-Abbott has described as the ‘silent menace’. The company’s latest product – its Quiet Vehicle Sounder – is believed to be one of the most significant developments since Chris introduced the reversing alarm to the UK in 1976.