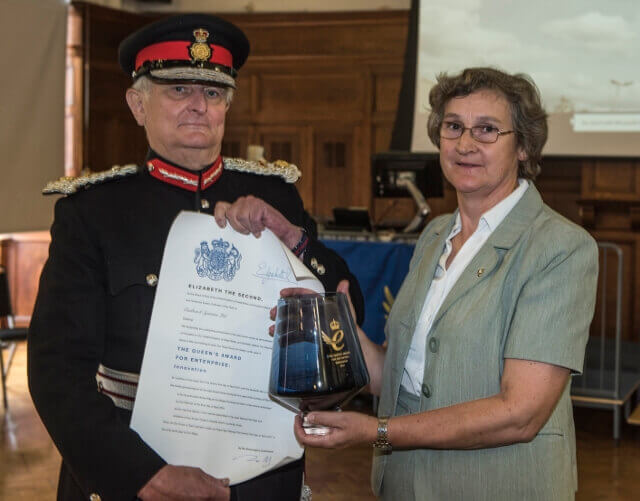 Carbon8 Systems Limited, a University of Greenwich spin-out company, was presented with the Queen’s Award for Enterprise by the Lord-Lieutenant of Kent, Viscount De L’Isle, in a special ceremony held at the Medway Campus on 6th September.

Founded just 11 years ago, the company has successfully patented its Accelerated Carbon Technology (ACT). It is now a world leader in the capture of carbon dioxide using industrial waste and contaminated soils to create carbon-negative building materials.
The company’s technology is of huge benefit to the environment, as this process prevents the release of hazardous waste into the atmosphere.

The Queen’s Awards for Enterprise are considered the UK’s most prestigious business prizes, rewarding outstanding achievements. Carbon8 won in the Innovation category. Since its launch, the company has been supported by the university, making use of its research facilities and commercial expertise.The Carbon8 team, who received a certificate and a cut-glass rose bowl from the Lord-Lieutenant, also attended a royal reception hosted by The Queen at Buckingham Palace this summer. The team includes Professor Colin Hills from the university’s Faculty of Engineering & Science and Dr Paula Carey, Managing Director, and Mark Orsbourn, Engineering Director.

The Lord Lieutenant of Kent congratulated the company on its “achievements, success and excellence,” adding that “Kent is extremely fortunate to have so many SMEs leading the way with innovative science and technology”.
“Your commercial development over the last five years, together with your growing international reputation, augers well for your future in expanding your business worldwide,” he said.

Carbon8 Systems has now been granted patents in Europe, America and Canada. The Global CO2 Initiative has identified Carbon8 as the world leader in the mineralisation of CO2.  Furthermore, a UN Environment Programme cites the University of Greenwich as a leading expert in the area of accelerated carbonation technology.  The company’s vision is to create a global portfolio of waste treatment plants, combining CO2 with industrial wastes such as cement dusts, steel slags and contaminated soils.