HM The Queen and HRH The Duke of Edinburgh’s visit to Kent 26th March, 2015 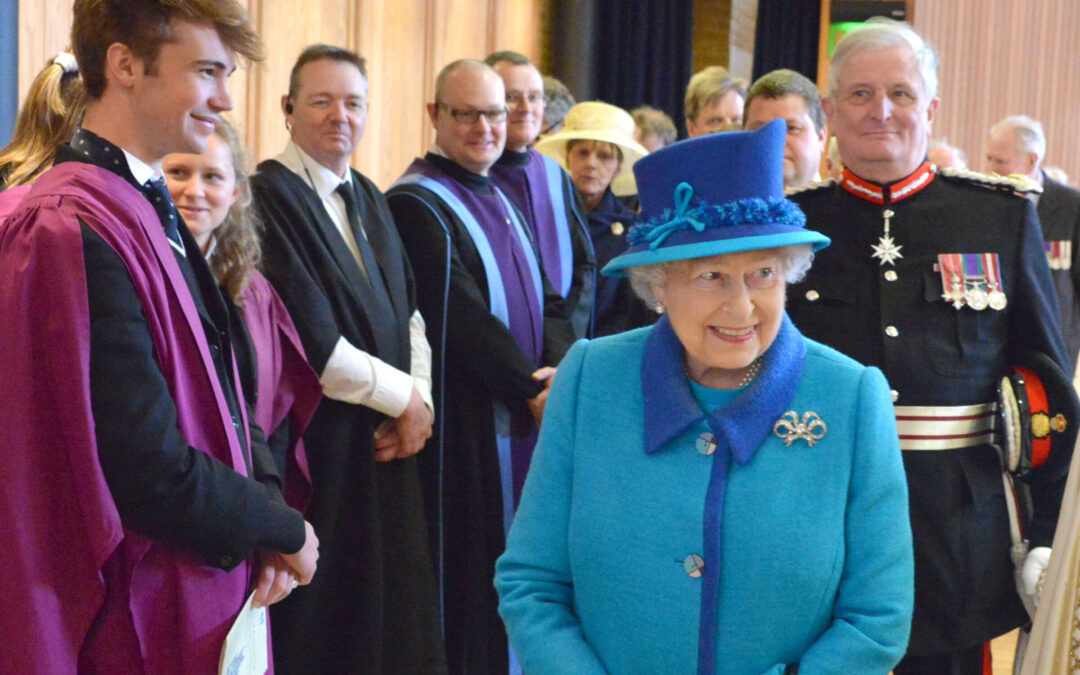 The Queen and Duke of Edinburgh travelled by Javelin train to Folkestone and were met by The Lord-Lieutenant, Viscount De L’Isle, before driving to The Battle of Britain Memorial at Capel-le-Ferne.

Here they toured the new Wing visitor centre, meeting the Trustees, volunteers, children from Capel-Le-Ferne Primary School and members of ‘The Few’ who took part in the Battle of Britain and fought in the skies above Kent from July to October 1940.

Unfortunately, because of the bad weather the fly-past of a Spitfire, Hurricane and Typhoon had to be cancelled, but The Queen and the Duke braved the elements to go out on to the balcony to see the memorial opened by HM The Queen Mother in 1993 and they waved to the waiting crowds. The Queen unveiled a plaque to open The Wing before departing for Canterbury.

On arrival at Canterbury The Queen and the Duke of Edinburgh were met by The Vice Lord-Lieutenant and The Dean and were entertained at a private lunch in the Deanery.

The Dean of Canterbury, The Very Reverend Dr Robert Willis DL greets The Queen, with the Vice-Lord-Lieutenant in the background. (c) Robert Berry.

A short service was held in the cathedral nave at which both the choir and recently formed girls’ choir sang.

The royal statues situated on the West Front of the cathedral which were created by sculptor Nina Bilby, and were unveiled by The Queen at the Dedication ceremony. (c) Maryann Webster.

This was followed by the unveiling of two new statues of The Queen and The Duke on the West face of the Cathedral. The Dean presented Nina Bilby, the sculptor and Cathedral stonemasons who had helped with the project.

The Queen and The Duke of Edinburgh then attended a reception in the International Study Centre, before departing.

The Queen, escorted by The Lord-Lieutenant, meeting guests at a reception held at The Cathedral Lodge. (c) Roberty Berry.