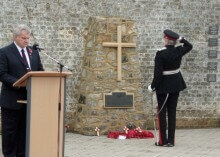 Dignitaries gather at the Folkestone Commemoration shortly before the Parade forms up. (c) Joanne Holmes.

The Lord-Lieutenant and Viscountess De L’Isle were invited to attend the Folkestone commemoration by the Town Mayor, Cllr Emily Arnold.
The Parade of 80 Servicemen, Veterans, Cadets, Scouts and Beavers formed up at the Leas Cliff Hall and marched, led by a Piper, to the War Memorial. The parade passed under the Step Short Arch, opened by HRH Prince Henry of Wales on 4th August 2014, to commemorate the centenary of the start of World War I and the servicemen who had embarked from the harbour for France, many never to return.
Following the Service attended by 1500 townspeople and conducted by The Mayor’s Chaplain, the last Post was played and two minutes silence observed before wreaths were laid. At the conclusion of the Service the National Anthems of Britain and France were sung, the latter was a poignant moment, subsequently, following the massacre in Paris on 14th November, six days later.
The parade marched to the Town Hall where the Lord-Lieutenant took the salute as the parade passed by.

In the afternoon The Lord-Lieutenant and Viscountess De L’Isle attended the Royal British Legion Village Branch Service of Remembrance at Aylesford held in the recently completed Garden of Honour, having been invited by the Branch President Brigadier Tony Kerr OBE.
An address was given by The Bishop of Rochester to a large congregation. The Royal British Legion Industries are based at the Village and provide much appreciated assistance to veterans and civilians alike, which include valuable social enterprises assisting many back into full-time employment.