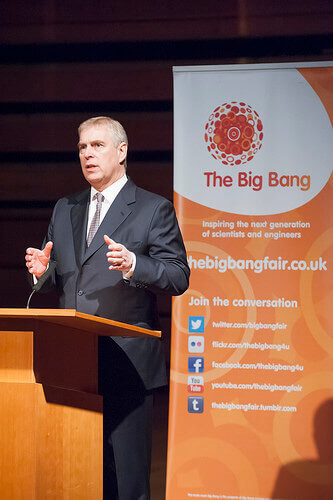 Sevenoaks School’s sixth annual Science Week, with a theme of Science and Digital Skills, was officially opened by HRH the Duke of York on 2nd March 2015. Before opening the event he met local dignitaries, the Chairman of Governors and  senior staff and students from Sevenoaks School, and observed some of the scientific displays and demonstrations.

The Duke has a keen interest in digital and technological education, is a champion of British Science, Technology and Engineering and is founder of the iDEA (Inspiring Digital Enterprise Award) initiative for young people.

Students enjoying a performance given by Titan the Robot. (c) David Merewether

HRH met students who have progressed to the final stages of the iDEA initiative, as well as visiting some of the shows and activities put on for local schoolchildren. He addressed an audience of 400 in the Pamoja Hall before officially opening the Sevenoaks School 2015 Science Week.

Sevenoaks School’s Science Week is one of the biggest events of its kind in the UK. Over 10,000 local schoolchildren attended throughout the week to enjoy a variety of scientific shows and activities, including robots, space demonstrations, science of the future events, medical trauma live shows and an array of other lectures and displays by visiting groups from the Wellcome Trust, to indoor pyrotechnics.