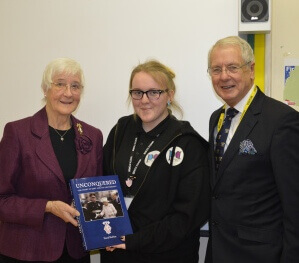 On 3rd February 2015 formal presentations of copies of the Kent Lieutenancy Book ‘Unconquered’ written by David McDine DL, were made to two Medway schools.  The books were provided, as with all schools in Medway, by Medway council, a generous gesture initiated by Councillor Mike O’Brien.

The first school to be visited was Greenacre Academy based in Chatham, and in the evening, a similar presentation was made to  Walderslade Girls’ School,which is also in Chatham, where Ann West DL and Cllr Mike O’Brien had the opportunity to meet members of the School Council, many of them who had just recently been elected, and to answer questions regarding the Kent Lieutenancy, before presenting the Deputy Head Girl with the book.

On 11th February another book presentation was made to The Sir Joseph Williamson’s Mathematical School in Rochester, by Russell Race JP DL, himself a previous pupil at the school. The  team were welcomed  by the Headteacher, Mr Hodges, and presented the book  at the Lower School Assembly consisting of about 500 pupils.