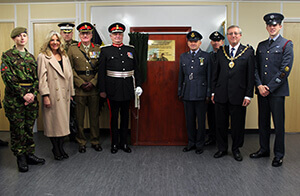 Army and Air Cadets from Romney Marsh joined the Lord Lieutenant of Kent, The Viscount De L’Isle MBE at the official opening of their new Joint Cadet Centre at St Mary’s Bay on Saturday 3rd December.

The new Centre will be home to 60 Cadets and their eight Adult Instructors, and replaces both the previous Army Cadet Force accommodation on the site as well as the Air Training Corps Hut located at the Marsh Academy in New Romney.

The new building includes a drill hall, kitchen, toilets and store rooms as well as classrooms and offices for adult personnel.

Romney Marsh has long been associated with the Armed Forces and is steeped in military history: the previous buildings on the old St Mary’s Bay military Camp were constructed before WWII and were used to house troops and equipment connected with defence operations as a counter to the expected Nazi invasion of 1940, after Dunkirk.

This involved use of the adjacent Romney, Hythe & Dymchurch Light Railway – better known locally as the ‘Little Railway’ – in moving troops and equipment around Romney Marsh.

In June 1944, the old Camp played its part again in the War effort towards D Day. From this area, together with the Light Railway, the Pipe Line Under The Sea (known as PLUTO) was brought together and then transported via the railway to the shore off Dungeness and then pushed/towed across the English Channel seabed, supplying much needed fuel to the Allied Invasion Forces.

Unveiling the plaque to open the new centre, Lord De L’Isle said: “I congratulate both South East Reserve Forces and Cadets Association (SERFCA) and Headquarters Air Cadets (HQAC) on securing the funding for this excellent facility. It is a most worthwhile investment in today’s – and future generations – of our Cadets, who represent the future of our County.

Commenting on the new building, Colonel Stephen Oxlade, Chief Executive of South East Reserve Forces’ & Cadets’ Association said: “We are delighted to be able to provide these Cadets and their Adult Instructors with a much needed new base with modern facilities. The new also facility allows us to maintain our strong military connections in the area whilst allowing the local youth community to enjoy the opportunities, challenges, skills and qualifications the Cadet Movements offer.”

For further information about joining either Kent Army Cadet Force, contact (01622) 750328 or Kent Air Training Corps on (01622) 754188. Enquiries are particularly welcome from adult members of the public, aged from 18-50, who may be interested in the challenge of becoming uniformed Adult Instructors.