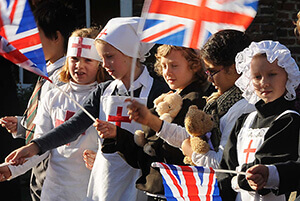 Remembering those who were killed, these girls chose to wear nurses’ uniforms.

A village devastated by a wartime bombing raid that killed 15 people and injured more than 30 others recovered thanks to its strong community spirit.

Taking part in the 70th anniversary commemorations of the tragedy at Sturry, near Canterbury, on 18 November, the Lord Lieutenant, The Viscount De L’Isle MBE, told villagers: “Your presence here today shows that strong sense of community is alive and well.”

Hundreds of children from the village school and nearby Milner Court (Junior Kings School) joined villagers commemorating the event, which was also attended by the Lord Mayor of Canterbury, Cllr Ian Thomas, and the Bishop of Dover, the Rt Rev Trevor Wilmott.

The Lord Lieutenant, who was accompanied by Viscountess De L’Isle, was shown the site of the Sturry Blitz by historian Derek Butler, who has just published a book about the disaster.

The Lord Lieutenant and Milner Court Headmaster, Peter Wells, on their way to the service.

During the commemoration service Lord De L’Isle said: “I believe, as I am sure all of you here today believe, that it is of the greatest importance to remember the great sacrifice made by the wartime generation.

“We must never forget that – especially in this Frontline County – the civilian population – men and women, boys and girls – on the Home Front were themselves often in the front line.

“This was tragically the case on 18 November 1941 when the savagery of war rained down on this village where people were going peacefully about their daily tasks.

“We have just heard of the horrors wreaked that day, when 15 people were killed and more than 30 injured, many very seriously.

“It is fair to say that in a relatively small population every single person suffered loss or was touched by this horrendous event. Yet did they cower and whine? No they did not. They immediately set about rescuing the trapped and injured and in the dark days that followed they helped one another.

Children in wartime costume joined in the commemoration service.

Trades-people helped bombed out competitors, others opened their homes to those made homeless, and in the words of the then Vicar, there were ‘countless unrecorded acts of kindness.’

“It was the strength of the community that carried the people of Sturry through those dark hours, and by your presence here today each and every one of you are demonstrating that this is still a strong community.

“On behalf of Her Majesty I commend you all for remembering those who made the supreme sacrifice here 70 years ago, those whose injuries threw their lives into disarray – and the many who mourned.

“As long as they – and the selfless actions of the community after the Blitz – are remembered, and this community is encouraged to continue to work together with that same wartime spirit, their sacrifice will not have been in vain.

The Lord Lieutenant lays a wreath on the church memorial to the fallen of Sturry.

“Finally, may I remind you that our Queen shared those same dangers during the war and has gone on to give sixty years of dedicated service to this Nation and the Commonwealth of Nations.

“The key time for The Queen’s Diamond Jubilee will be the four-day weekend 2-5 June, when all our thoughts will be focussed on thanking Her Majesty for that wonderful record of service.

“In Kent we should focus ourselves on the events in which we can join Her Majesty in celebration. On Sunday 3 June it has been suggested that all of us across the land should join together in a ‘big lunch’ within our communities.

“This might take the form of a street party in urban areas or parties on the village green in other places, so I hope we will find groups of like-minded people putting their heads together and forming committees to deliver the biggest of Kent lunches across the County.

“The following evening, Monday 4th June, it is planned to have a chain of 2012 beacons across the United Kingdom the Commonwealth and Protected Territories. I have asked local authorities and rural business organisations to help co-ordinate the network within Kent.

“I very much hope that with the great spirit of community that existed here after the Blitz and is still so obviously alive and well today, will ensure that the people of Sturry join us in celebrating the Diamond Jubilee.”[divider]

Re-enactment showing how to make the best of wartime rationing.