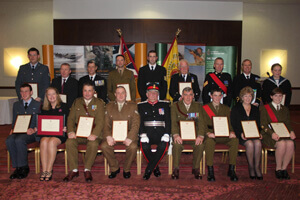 The Lord Lieutenant with award winners.

Lord De L’Isle thanked everyone there on behalf of Her Majesty and the County for their dedicated service in – or support for – the Volunteer Reserve Forces and Cadets.

He said: “The men and women and the splendid Cadets being recognised for their efforts are very special sons and daughters of our great Frontline County. And the Volunteer Reservists and Cadet leaders who serve Queen, the Nation and our County in uniform, as well as holding down often demanding civilian jobs are truly what their forebears were called by Field Marshal Viscount Slim – Twice a Citizen.

“Tonight, as I speak, young Servicemen and Women from Kent are on active service in Afghanistan and elsewhere. These are indeed extraordinary times for Kent’s Territorials and other Volunteer Reservists. In the past few years they have been employed on operational service on a scale unprecedented since World War II.

“Nationally, since 2003, more than 24,000 reservists have deployed on or in support of operations. Others, although not deployed on operations, have nevertheless played a valuable part at home and in recruiting and training the next generation of volunteers.

“And I am sure you will agree they all deserve the full support of the public. I am most grateful, too, to all of our local authority representatives for the commitment, they have shown and continue to give, in support of all the Forces of the Crown and their families. Such support is not about politics, nor whether people are for or against the military action. It is about fellow-feeling for those who risk their lives, and for their loved ones left behind in our care. They all deserve our support and our heartfelt thanks.

“On behalf of Her Majesty, I would also like to commend all the civilian employers, who have demonstrated their understanding and backing for their staff serving in the Volunteer Reserves. Thank you for the support you have shown and the backup I am sure you will continue to give.

“My request to our civic, business and educational guests is: if you take away nothing else from tonight I urge you to pass on these points to your various networks: