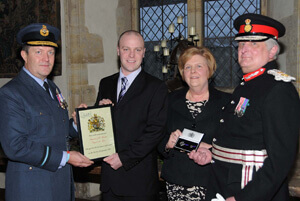 The family of Sergeant James Hunter, who was killed on active service with the Royal Air Force Regiment during the Cyprus Emergency in 1956 has been presented with the Elizabeth Cross.

It was received by his daughter, Mrs Diana Wilkins, of Coxheath, Maidstone, at a private ceremony at Penshurst Place, home of The Lord Lieutenant of Kent, The Viscount De L’Isle MBE, on 14 December 2011.

The award was created in 2009 to provide national recognition for the families of Armed Forces personnel who have died on operations or as a result of an act of terrorism since World War II.

Presenting the cross, Lord De L’Isle, Her Majesty The Queen’s representative in the County, said the people of Kent and the Nation saluted her and the memory of her father.

He said the Cross that bears Her Majesty’s name will become a cherished heirloom – a permanent reminder of those who laid down their lives and a tribute to the families who have borne their loss with such dignity and fortitude.

The Lieutenancy of Kent has long campaigned for greater public support for our Armed Forces personnel and their families, and this has received widespread backing in Kent, the Frontline County.