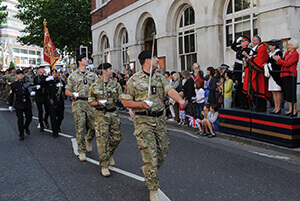 On 1st September 2011, his first day as Lord Lieutenant, The Viscount De L’Isle MBE, took the salute when members of the locally-recruited 2nd Royal Tank Regiment exercised their Freedom of Maidstone by marching through the County Town.

Lord De L’Isle told them that, historically, the Lieutenancy was responsible for organising the defence of the County.

“That responsibility now lies elsewhere, but the close relationship with the Forces of the Crown remains, and over the past few years the Lieutenancy of Kent has led the campaign here to encourage greater public support for the Armed Forces and their families.

“It is a campaign that has won the enthusiastic support of all Kent’s local authorities – and the people themselves.

“Kent is part of your recruiting area and we are proud of our special link with your Regiment, the oldest Tank Regiment in the world and of the fact that in your short history you have won 73 battle honours and six soldiers from the Regiment have been awarded the Victoria Cross.

“Your tour of duty in Afghanistan was the tenth time in the last seven years that the Regiment has deployed men and women on operations. That is a remarkable record in the finest traditions of the Regiment, and on behalf of Her Majesty and of the people of Kent I salute you and thank you – and your families – for your courage and fortitude and for all that you do in our name.”

Lord De L’Isle, who is also Honorary Colonel of Kent Army Cadet Force, said he was proud that many of the cadets wore the Royal Tank Regiment’s famous cap badge.