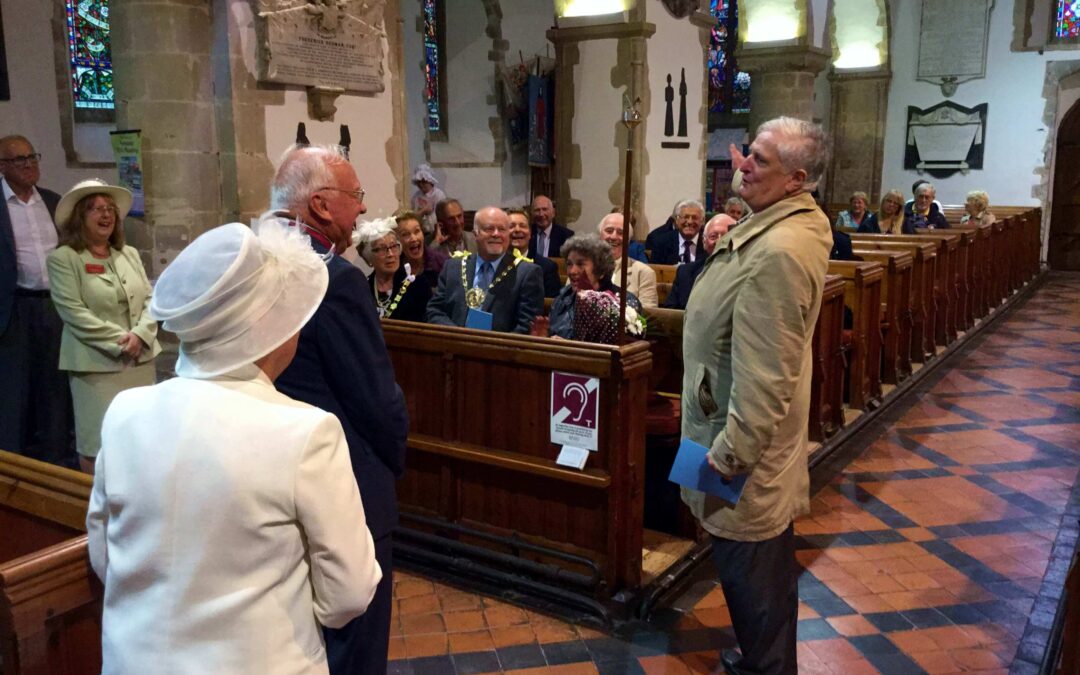 Meeting costumed characters from the past on their tour, here Lord and Lady De L’Isle, seated right of the audience in the Old Vestry within the parish church, are introduced to Mr. and Mrs. Richard Culmer. Mr Culmer was a well known farmer and shipbuilder who died in 1495. (c) Tim Elliott.

The St Peter’s Village Tour http://villagetour.co.uk/ has been taking place for the last 21 years. It is an entirely volunteer-led initiative which tells the history of St Peter’s, near Broadstairs, through vignettes acted by volunteer members of the village community in costume.

Sadly on 13th August a heavy downpour forced the cast and audience into adopting the wet weather programme which entailed the various vignettes being acted out around the Church.
The St Peter’s Village Tour group was awarded the Queen’s Award for Voluntary Service in 2009.

At the end of the tour the Lord-Lieutenant was presented with a souvenir booklet by the Chairman, Sue Elliott, pictured background far left. Here on the right the Lord-Lieutenant is thanking the Tour Founder and President, Brian Sleightholm.
(c) Tim Elliott.

A voluntary collection is made at the end of each tour and any profits after the expenses, are donated to local projects, including the Church Tower which is currently undergoing extensive repairs.
Speaking at the conclusion of the Tour the Lord- Lieutenant congratulated the cast and organisers for their polished performance under difficult circumstances, and commended everyone for the donations they make to local projects.

After the President had addressed Viscountess De L’Isle, his wife Sheila Sleightholm, presented her with a bouquet of flowers, which were very much appreciated. (c) Tim Elliott