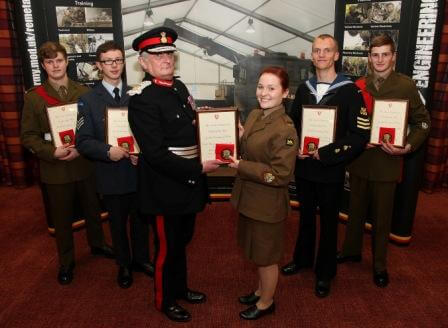 Award Winners with the Lord Lieutenant

The Lord-Lieutenant has traditionally been responsible for the Defence of his county, when under threat. Today his role is President of his county’s committee of the South East Reserve Forces and Cadet Association.

In paying tribute to all The Armed Forces the Lord-Lieutenant thanked all Local Authorities for supporting the Community Covenant, which enshrines in law the communal duty to support servicemen. Where possible, in return, military facilities will be given wider public access, for example, military recreational sports facilities.

For more information on the Kent Lieutenancy’s links with the Armed Services, please click here.