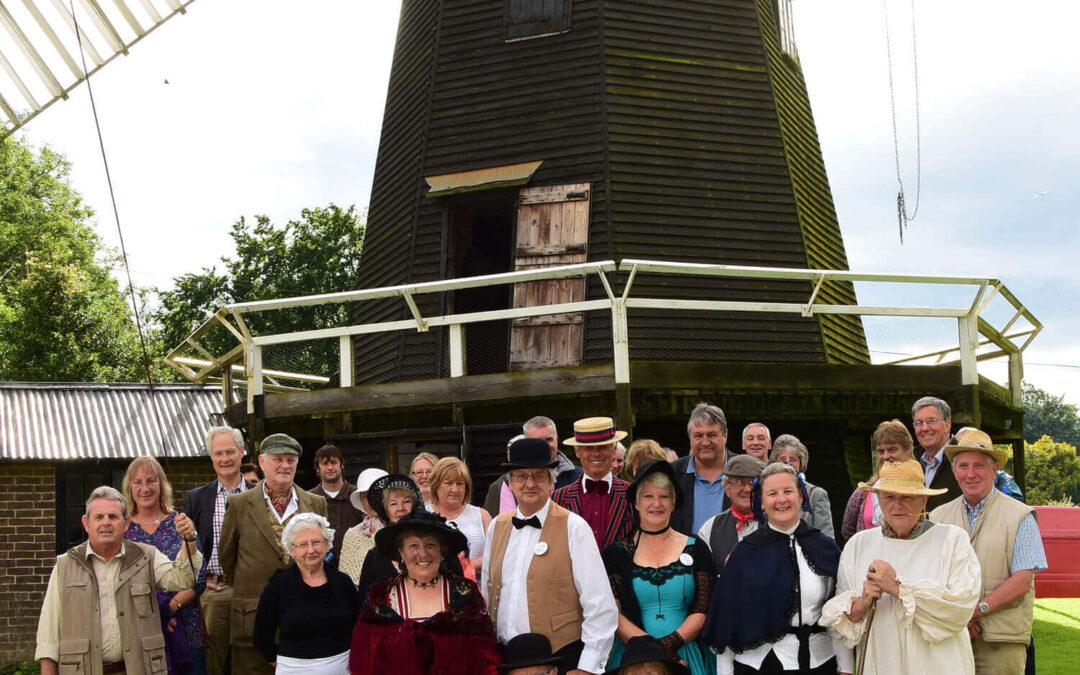 Milling and local agricultural and social life through the ages have been brought graphically to life in the newly-completed museum at the historic Davison’s Mill, Stelling Minnis, which reached its 150th anniversary this year.
Years of fund-raising and community effort was praised by Deputy Lieutenant Mrs Ros McCarthy, representing the Lord-Lieutenant, as she performed the official opening ceremony between torrential downpours on 25th June.
The museum features well-illustrated display boards, a giant pictorial map of the area featuring everything from Roman soldiers marching down the nearby Stone Street to Battle of Britain dogfights, dioramas of mills and agricultural scenes including a dramatic re-creation of the Swing Riots which started locally – and a fascinating collection of old tools and artifacts.

Windmill and Museum Trustees and supporters, many in Victorian costume, beside the 150-year-old mill after the official opening of the museum. (c)Barry Duffield.

Mrs McCarthy told donors and supporters: “As a retired head teacher I cannot help but be impressed by the potential of the museum displays for helping young people understand where their food – and particularly bread – comes from.” She amused the Windmill and Museum Trustees and supporters with stories of assistant miller and lay preacher Sam Harris, with whom she had a family connection.
Money to build and fit out the museum has been raised over many years through popular windmill fetes, Sunday cream teas – and grants from a number of benefactors.
Davison’s Mill and Museum is open to the public on Sunday afternoons throughout the summer.