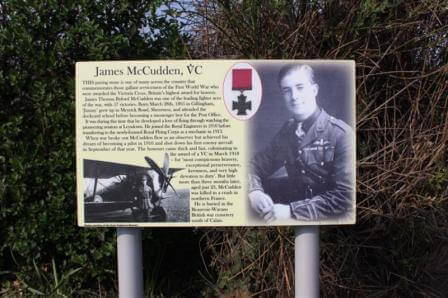 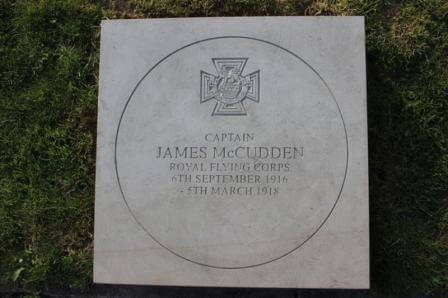 Major James Thomas Byford McCudden VC DSO MC MM CdeG(FR) RAF, the most highly decorated WWI airman of the entire British Empire, has been honoured with two new memorials marking the 100th anniversary of the awarding of his Victoria Cross.

The Lord-Lieutenant of Kent, Viscount De L’Isle MBE, attended the unveiling of the first memorial paving stone at the Royal Engineers Museum in Gillingham, the town of Major McCudden’s birth, on 12th April 2018.

Major McCudden grew up and went to school on the Island of Sheppey, where the second memorial stone was unveiled at the Sheerness War Memorial on 21st April 2018 by Deputy Lieutenant of Kent Mr Paul Auston DL.

As children, James and his elder brother Willie spent hours watching early planes take off from Eastchurch and both vowed to become pilots. At 14, James left the Garrison School and joined Sheerness Post Office as a telegram boy and by 1910 he followed in his father’s footsteps by becoming a bugler in the Royal Engineers. Three years later he transferred to the fledgling Royal Flying Corps, later to become the Royal Air Force, as a mechanic and went on to become one of its top pilots.

James was born on 28th March 1895, and died on 9th July 1918 in a plane crash on his way to France to take up a new command. He was 23 and had already became one of Britain’s most highly decorated airmen after downing 57 enemy planes. His Victoria Cross, awarded ‘For most conspicuous bravery, exceptional perseverance, keenness, and very high devotion to duty’ was the very first VC awarded to a member of the newly created (on 1st April 1918) Royal Air Force.