Rainham Pupils win praise from the Lord Lieutenant, 23rd May, 2014 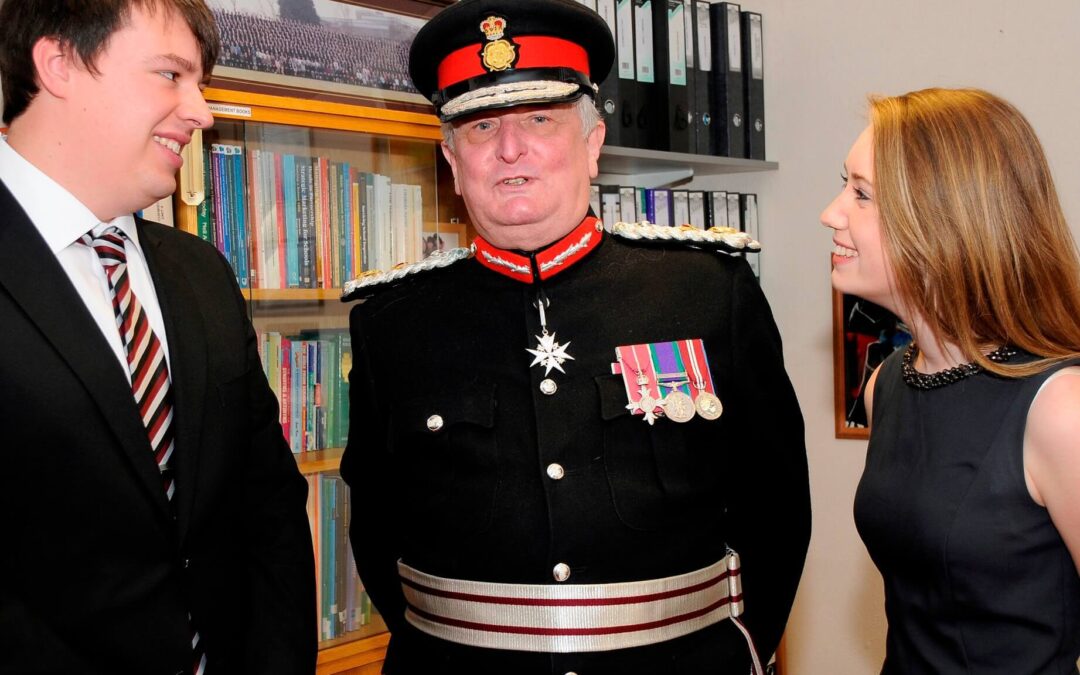 Pupils at Rainham Mark Grammar School were praised by the Lord Lieutenant, Viscount De L’Isle, for their good citizenship and charity fundraising when he visited the school on Friday 23rd May.

Accompanied by the Mayor of Medway, Cllr Barry Kemp, and Medway Council’s portfolio holder for children’s services, Cllr Mike O’Brien, he spoke at the Year 10 assembly and held a question and answer session with the School Council.

He told pupils: “I am especially pleased to learn that you raise money in aid of charities, and help with many other community tasks, and I congratulate the teaching staff for pointing out to you, the young, the importance of helping others. I would like to thank you all on behalf of Her Majesty The Queen for what you have done and I know will continue to do.”

The event marked the publication of Unconquered, a new book that tells the story of the Frontline County and the role of the Lieutenancy over the past 500 years.

Medway Council is providing all its secondary schools and libraries with copies of the book. Cllr O’Brien said the Lieutenancy had moved on from the military and magisterial leadership that it once had to promoting citizenship and voluntary working in the community.

“It seeks to engender pride in Kent’s unique history and confidence in its future. If the Lieutenancy is to continue to be an asset to Kent it is important that people understand the origins and modern role, hence this book. We hope that by providing copies we will inspire people to enjoy and explore this rich history and heritage.”

Pupils quiz the author at the display in the school library. (c) Barry Duffield

Following the Lord Lieutenant’s tour of the school, the author, retired Deputy Lieutenant David McDine, and serving DL Barry Duffield, who did all Unconquered’s special photography, staged a display of artwork in the school library and discussed production of the book and the Lieutenancy’s historic and modern roles.