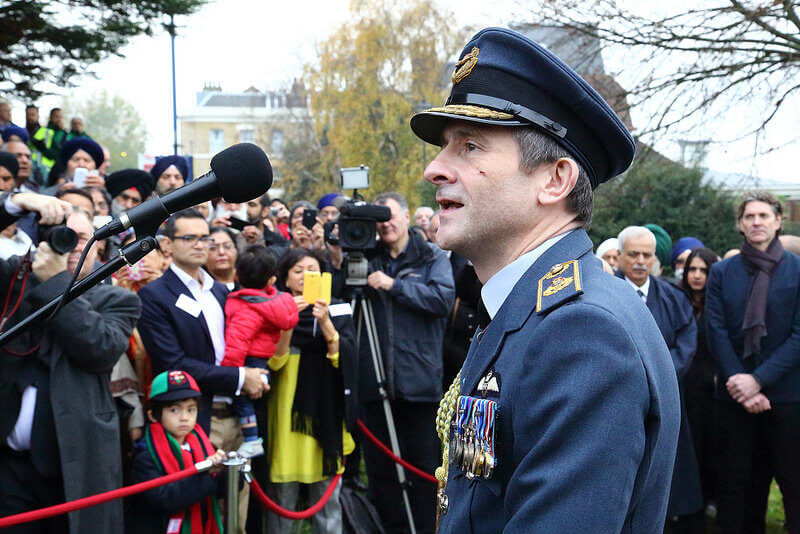 The new statue is sited in St Andrew’s Gardens in Gravesend to commemorate and celebrate all those who volunteered to serve Britain during various military campaigns between 1914 and 2014.

It was decided that Squadron Leader Mahinder Singh Pujji DFC would be a great example to represent those who chose to fight for our country. The Statue was unveiled by Air Vice-Marshal Edward Stringer CBE MA BEng RAF.

Squadron Leader Pujji is one of the 2.5 million servicemen who came from the Indian subcontinent, the largest volunteer army in history.  In 1940 Pujji was one of 18 qualified Indian pilots who volunteered for the Royal Air Force.  He had a distinguished career during WWII flying with 43 Squadron and being awarded the Distinguished Flying Cross for his bravery.

Douglas Jennings ARBS was chosen as the artist for the commission from a shortlist of four prominent sculptors. He said “Pujji is a fabulous representation and example of those who gave up everything to fight for Britain and the Commonwealth. He is a shining example, completely right to represent all those who fought. This man wasn’t asked to fight, he chose to. Pujji refused to wear the protective head gear because of his religion. He was shot down twice, lost many of his friends and colleagues, but he continued to fight, as did many Sikhs.”

Squadron Leader Mahinder Singh Pujji worked hard to raise awareness of the role the Commonwealth soldiers played in the war and was Chairman of the Indian ex-Services Association. Born in 1918 in Simla, India, he spent his last few years in Gravesend. Shortly before his death on 18 September 2010 aged 92, Pujii attended the wreath-laying ceremony by Viscount De L’Isle  which was held at the memorial outside Gravesend airfield to commemorate “The Few” on the 70th Anniversary of the Battle of Britain.

Douglas spent six months making the sculpture and researching the fine detail of the uniform and even Pujji’s turban. He said: During the sculpting process, I was advised by a number of experts including Group Captain Patrick Tootal OBE DL, RAF (Retd), an RAF pilot for 33 years, on all aspects of uniform, even down to the King’s crown on each button by the RAF Hendon Museum and of course by Pujji’s son Satinder on creating the perfect likeness. “Researching the turban was fascinating; I learnt how to tie the turban Pujji wore from Mr Jagdev Virdee. He highlighted there are several different ways of tying a turban; however Pujji tied his in a distinct way with six folds and a high peak. It was paramount that I got that right”

The event was attended by a large number of the Sikh community and visitors from India.