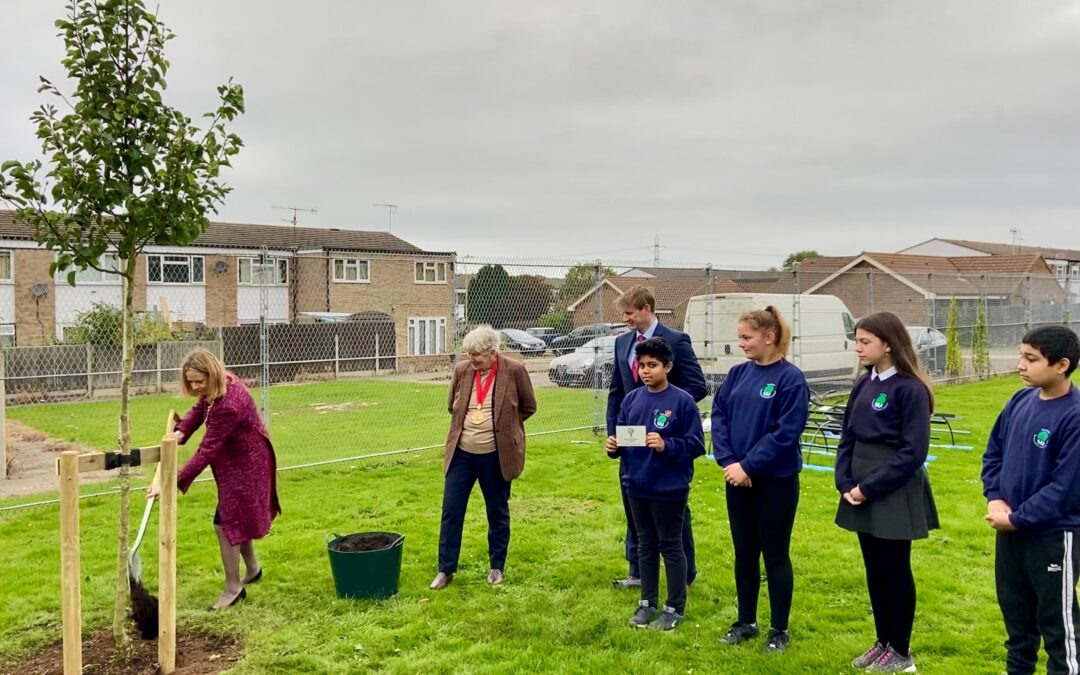 On the last day of the official tree planting season, which runs from October to March, Her Majesty The Queen has sent a message to thank people all over the United Kingdom who have come together to plant over a million Jubilee trees in her name. With a focus on planting sustainably, Her Majesty’s message marks the halfway point for The Queen’s Green Canopy initiative which spans two official tree planting seasons. Tree planting will commence again in October 2022, through until the end of the Jubilee year. Her Majesty and The Prince of Wales, Patron of the QGC, marked the start of the official planting season for The Queen’s Green Canopy on 1st October 2021, with the planting of a copper beech tree on the Balmoral Estate. Since then, thousands of families, schools and community groups have come together to plant Jubilee trees across the country to create a canopy of green in The Queen’s name, as a tribute to Her Majesty’s 70 years of service to the Nation. With planting paused until October, The Queen’s Green Canopy will move into a conservation phase, to unveil 70 Ancient Woodlands and 70 Ancient Trees. As quintessential features of the UK’s much-loved landscapes, Ancient Woodlands are often referred to as nature’s “crown jewels”.

Key achievements for The Queen’s Green Canopy at the halfway point include:
UK Tree Planting – in the first planting season, from October 2021 to March 2022, the project has inspired over a million trees to be planted. With The Prince of Wales as its active Patron, the QGC is generating the planting of large celebration trees, new majestic avenues, urban planting and expansive new forests that will benefit generations to come. The QGC is bringing beauty and benefits of trees to areas of need, particularly in urban schools and communities. The QGC aims to have high quality legacy planting in every county of the UK, with community engagement and best practice at its heart and an emphasis on making a difference in some of the most deprived areas in the UK. The QGC launched a “Champion Cities” programme to celebrate some of the nation’s outstanding cities which have trees and woodland as a central part of their plans for green spaces.

Conservation
The QGC will dedicate a UK-wide network of 70 Ancient Woodlands that will demonstrate to the wider public the importance of the UK’s Ancient Woodlands in terms of their natural and social history and ecology. Many of the selected woodlands will also provide a vital source of education for schools and community groups. The dedication of 70 Ancient Trees for the QGC will be the start of a larger project to propagate material from many of the UK’s most important Ancient Trees, to ensure that their genetic resource is conserved. In a dynamic and unique way, the QGC has united forestry and environmental groups across the UK behind a common goal: to plant new trees and conserve existing and precious trees – some of which are hundreds of years old.

Background
The Queen’s Green Canopy is a unique tree planting initiative created to mark Her Majesty’s Platinum Jubilee in 2022, which invites people from across the UK to “Plant a Tree for the Jubilee”. Everyone from individuals to Scout and Girlguiding groups, villages, cities, counties, schools and corporates will be encouraged to play their part to enhance our environment by planting trees during the official planting season between October to March. Tree planting will commence again in October 2022, through to the end of the Jubilee year. With a focus on planting sustainably, the QGC will encourage tree planting to create a legacy in honour of The Queen’s leadership of the Nation, which will benefit future generations. As well as inviting the planting of new trees, The Queen’s Green Canopy will dedicate a network of 70 Ancient Woodlands across the United Kingdom and identify 70 Ancient Trees to celebrate Her Majesty’s 70 years of service. By inviting everyone to plant considerable numbers of new trees throughout the country, the QGC seeks to highlight the significant value of trees and woodlands as nature’s simple but highly effective way to clean the air we breathe, slow the impact of climate change, create important wildlife habitats and improve our general health and wellbeing.