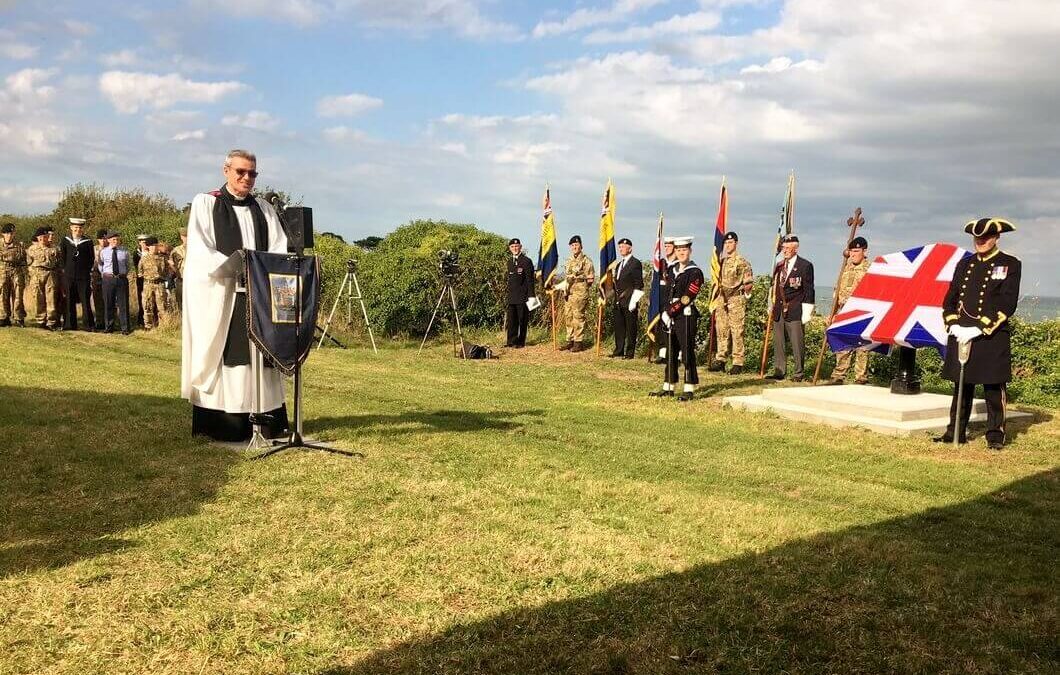 Procession of the Clergy and The Lord Warden, Admiral the Lord Boyce KG GCB OBE DL, to the service on the site of the Walmer Aerodrome. (c) Walmer Parish Council.

A service organised by Walmer Parish Council took place on the Hawkshill Freedown, adjacent to the south side of Walmer Castle commemorating the opening in Spring 1917 of the Royal Naval Air Service Aerodrome. A commemorative stand erected by Walmer Parish Council in honour of all Service Personnel who were stationed at Walmer Aerodrome  in both WW1 and WW2, was unveiled by the Lord Warden of the Cinque Ports, Admiral of the Fleet The Lord Boyce KG GCB OBE DL. The Lord-Lieutenant was represented at the event by Brigadier (Retd) David Ralls CBE DFC DL.

It was late afternoon, when, the Crucifer of St. Mary’s Parish Church , Walmer, led the small procession through the grounds of Walmer Castle to the Freedown. The cross was followed by the Vicar of Walmer, The Rev’d Canon Seth Cooper, Chaplain of the Fleet The Venerable Ian Wheatley CB QHC RN, Deputy Chaplain in Chief of the RAF, The Reverend (Group Captain) John R. Ellis QHC RAF, The Lord Warden, preceded by his attendants, and the Chairman of Walmer Parish Council, Mr Pat Heath. The procession route through the Castle grounds was lined with members of local Cadet Forces and the procession upon arriving at the Service was greeted by Standard Bearers from the RBL and Local Cadet forces who were under the command of the Parade Marshall Julian de-Zille.

From the Castle grounds the procession made its way across the Hawkshill Freedown to the site of the Service where Deputy Lieutenant Brigadier (Retd.) David Ralls CBE DFC DL and the invited guests were assembled. There was representation from both the Canadian and Australian High Commissions, who had many citizens serving with British forces in WW1. Senior Officers from the Royal Air Force and the Royal Navy were also present and two members of the family of one RNAS Officer who served at Walmer during WW1. The County President and Branch Presidents of the Royal British Legion were present and the National President sent a message. There were other invited guests including people from the local branch of the Royal British Legion who had contributed to the organisation and success of the event.
Military Prayers were said.  The Lord Warden, Admiral the Lord Boyce KG GCB OBE DL  gave an address and read a letter that had been received from HRH The Duke of York. He also read out the names of the sixteen Officers whose names were put on a memorial, which is now on private land.

The County President of the Royal British legion read the Exhortation and the Kohima Epitaph. Wreaths were laid and it was a poignant service remembering the great sacrifice that was made during WW1 and WW2. After the blessing by the Vicar of Walmer and the singing of the National Anthem, the service came to a close and the Procession returned to Walmer Castle through a parade of Cadets from the local Cadet Forces after viewing the new Commemorative Stand.

On the same day exactly one hundred years ago at the same time that this service was ending a plane took off from the aerodrome, piloted by the Commanding Officer at that time, Flight Lieutenant Harold Spencer Kerby RNAS. Reports had been received that German aircraft had bombed Margate. He engaged the enemy off Southend and for that action was awarded the Distinguished Service Cross – ‘For the great courage and initiative shown by him’.