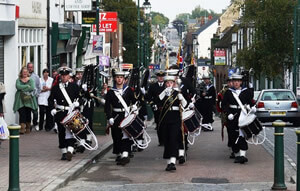 Over 150 Sea Cadets and Adult Volunteers from nine units across West Kent joined by units from the Army Cadet Force, came together to commemorate the most influential battle of its age which gave Britain mastery of the oceans for a further two centuries.