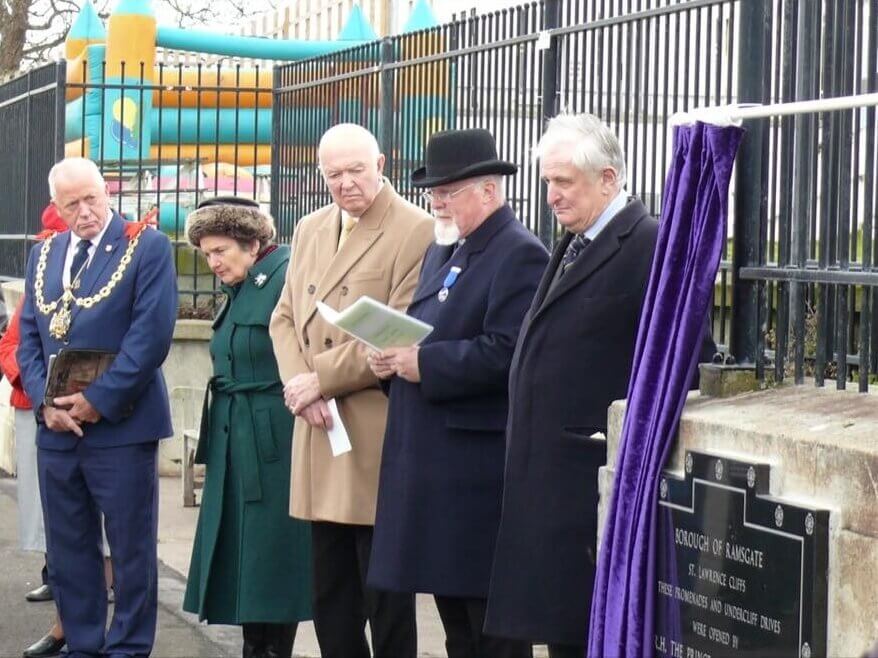 The Lord Lieutenant and Viscountess De L’Isle attended the Westcliff Conservation & Community Association plaque unveiling ceremony at Royal Esplanade, Ramsgate on 24th November. The original plaque, unveiled in 1926 by the then Prince of Wales, later Duke of Windsor, was stolen in 2015 and this new plaque, unveiled by the Lord-Lieutenant, forms its replacement, being 91 years to the day of the first ceremony. The original plaque was laid to commemorate the regeneration of the Westcliff by the Borough of Ramsgate.  The new plaque celebrates the continued efforts of of volunteers from the Westcliff Conservation and Community Association who help to maintain this characterful part of Ramsgate which includes maintaining the  Rose Garden,  the Shelters and litter picking. Before the unveiling ceremony a short prayer was said by the Reverend Councillor Stuart Piper.

The replacement plaque unveiled by the Lord-Lieutenant. (c) Westcliff Conservation and Community Association.

In his speech the Lord-Lieutenant said:
” I congratulate all those on the Westcliff Conservation and Community Association who together with Thanet District Council have worked tirelessly since the bronze plaque was stolen in 2015 to produce and fix the facsimile plaque, carved in stone.
Kent is a county full of volunteers performing a wide variety of tasks, which would go undone without your invaluable support and dedication. In this case you are maintaining a wonderful rose garden overlooking the Royal Harbour and out to sea which adds to the quality of all our lives. Thank you very much for all you have done in the past 91 years and for what I know you will continue to do in the future to enhance and maintain the historical significance of Ramsgate and the Royal Harbour.”