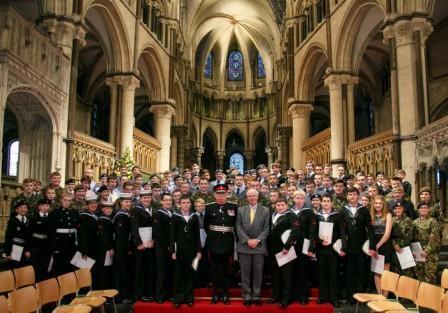 The Lord-Lieutenant attended a ceremony held in the Quire of Canterbury Cathedral on Monday 17th June to present certificates on behalf of the education charity CVQO celebrating the achievements of 91 Kent cadets. The certificates acknowledge the Cadets completion of CVQO-led BTEC Level 1 Certificate in Teamwork, Personal Skills and Citizenship.

Cadets pictured with the Lord-Lieutenant and Mr Edward Woods, CEO of CVQO.

The group are the largest single cohort ever to have been presented with CVQO certificates. The cadets, aged between 13 and 15, represented all three military services as well as St John Ambulance and came from units across Kent including the Medway towns, Maidstone, Ashford, Swale and Thanet. For many of the cadets, the qualification was the first they had received, building their confidence in education from an early age, and the first step along the path to employment in the county’s knowledge based economy. The Lord-Lieutenant praised the cadets for their achievements and thanked the Volunteers for their work with the cadets.

The event took place in front of an audience of parents, adult volunteers who work with the cadets and a number of VIPs including those who funded the qualification, through the charity.

A marimba ensemble from the Combined Cadet Force at Gad’s Hill School, Kent, played as guests arrived and took their seats. Their performance was being assessed for their CVQO-led BTEC Level 2 in Music, which fittingly demonstrated the continuity of education that can be achieved with CVQO.