A First for Kent: The Digital Memorial of The Queen’s Own Buffs The Royal Kent Regiment Held at University of Kent at Canterbury, 29th October 2018 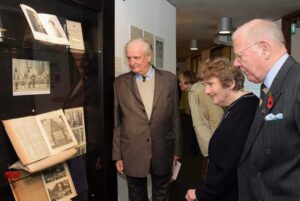 Viscount De L’Isle, Lord-Lieutenant of Kent, attended the launch of The Queen’s Own Buffs The Royal Kent Regiment digitized records to be held in the University of Kent. Robert Sidney, a forebear of Lord De L’Isle, was the first Colonel of The Buffs from 1665 to 1668.  Lord De L’Isle is extremely proud to have served as Honorary Colonel of the 5th Battalion of the Princess of Wales’ Royal Regiment (1992-1999), a successor regiment of The Buffs.

The President of the Regimental Association of the Queen’s Own Buffs (PWRR), Colonel (Retd) Peter Bishop OBE DL, has made the decision, after hearing that the Regiment will cease to exist from December 2019. However, to date, there is no evidence in the County that The Queen’s Own Buffs The Royal Kent Regiment ever existed. To that end it is intended to have two ‘memorials’ – one at the National Memorial Arboretum (to be unveiled in September 2019) and one in Kent. 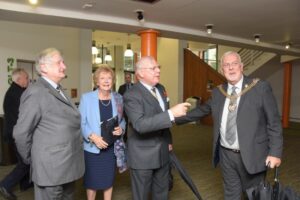 The memorial in Kent is very much ‘a first’ in memorial terms as it is ‘digital’ and part of the University of Kent’s offering to their military history students and to the world at large, thanks to the power of the internet. There is a ‘domain page’ with the regimental history outlined but, more importantly, all the archival records have been digitized and can be accessed by those wishing to do research or just learn more about the Regiment. There will be a display of the activities of The Buffs The Royal East Kent Regiment (Buffs) and the Queen’s Own Royal West Kent Regiment (QORWK) in World War I – the two Regiments amalgamating to form The Queen’s Own Buffs in 1961. 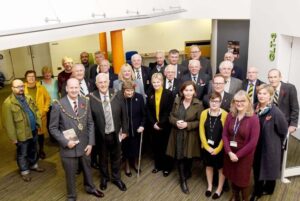 Guests at the launch of the memorial at the University of Kent.

No other Regiment or University has formed such an alliance and this is a great coup which is already attracting much attention. The University website will be linked to the Imperial War Museum, the National Army Museum, all associated Regimental Museums and, now, the British Library have requested the same.