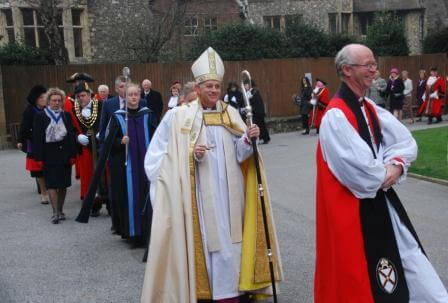 The ninth Civic Service was held in Canterbury Cathedral and was attended by Civic Leaders of Kent, Chairmen of Parish Councils, The Clergy, Magistrates, Armed Forces representatives, Police, Emergency Services and a multitude of individuals from a cross-section of voluntary organisations, working for the public good.

The Lord-Lieutenant said “On behalf of Her Majesty I thank you all for what you are doing for Kent’s communities. You are doing Kent proud”.

The congregation of about 840 demonstrated the event’s continuing popularity and enduring support that there is for the county of Kent.

The Service in progress

The Lord-Lieutenant gave an address in which he outlined the Lieutenancy’s plans to commemorate the centenary of the start of the First World War. The events which are being specifically promoted are:

The Lord-Lieutenant is aware there are many other events being planned and hopes if appropriate, a member of the Lieutenancy will be asked to attend. The Civic Service was sponsored by The Allan Willett Foundation.