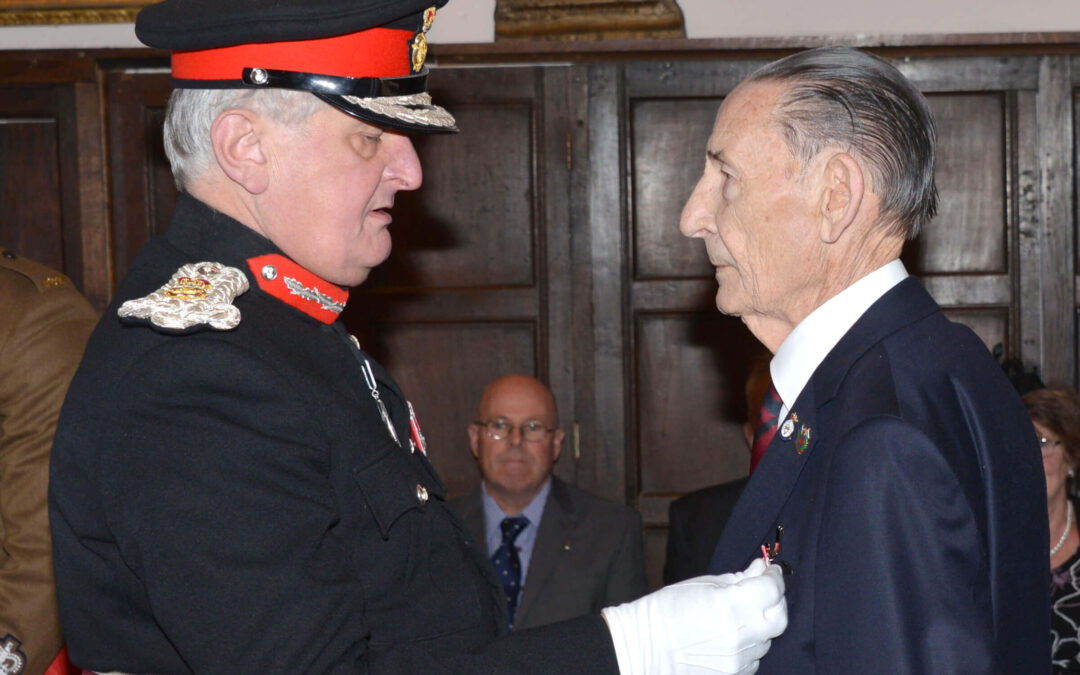 Kent’s finest have been honoured by The Queen with the presentation of their British Empire Medals (BEM). Chosen for their tireless community work and dedication, the 6 recipients, Major (Ret’d) Maurice Bernard from Chatham, Mr Anthony Condon from Dover, Mr Noel Grabham from Tonbridge and the following recipients all from Folkestone – Mrs Rose-Marie Milton, Mrs Christine Pledger and Mrs Doris Thorogood were named in The Queen’s Birthday Honours list after the medal was reintroduced in the Diamond Jubilee year.

The Lord-Lieutenant, Viscount De L’Isle MBE, held an Investiture at Penshurst Place to present the six Medallists with their award, following the official announcement in the Birthday Honours list in June this year.The Ceremony took place in the Sunderland Room where guests of the recipients were able to witness the Ceremony.  The short citations were read by Mr Geoff Wild, the Clerk to the Lieutenancy.  Two of the Lord-Lieutenant’s Cadets, Sgt Major Jessica Fox (Cranbrook School Combined Cadet Force) and Sgt Major Oliver Aucamp (Sutton Valence School Combined Cadet Force) assisted the Lord-Lieutenant during the Ceremony.

Major (Ret’d) Bernard received his award for tirelessly campaigning for improved dementia services for both patients and their carers in the Medway area.

Mr Anthony Condon has dedicated many years volunteering with the scouts and the local scout clubs in Dover and has seen a number of his scouts achieve the Chief Scouts Gold Award.

Mr Noel Grabham receives his British Empire Medal for his work with the Royal Society of Chemistry, particularly in relation to work with its Benevolent Fund.

Mrs Rose-Marie Milton has spent 26 years working for St Mary’s Church of England Primary School and her services in the field of education have been recognised with her being awarded a British Empire Medal.

Mrs Christine Pledger has been a volunteer for the Pilgrims Hospices for the last 36 years and was a member of the initial fundraising group and continues to actively fundraise for the benefit of the Hospices.

Finally, Mrs Doris Thorogood has been recognised for over 60 years of service to music in the Folkestone area and has been the local area representative for the London College of Music in Kent for over 20 years.

Anyone wishing to nominate an individual for an award of the BEM should go to https://www.gov.uk/honours and download an application form.