Canterbury Cathedral welcomes the return of the Relic of St Thomas Becket, Saturday 28th May 2016 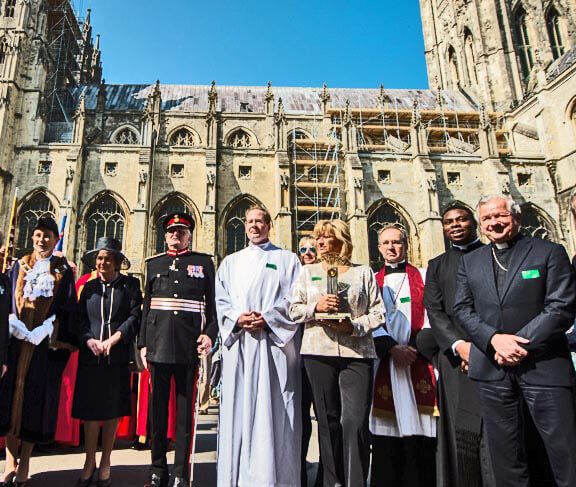 The Lord-Lieutenant and Viscountess De L’Isle pictured by the Cathedral with dignitaries from Hungary and Canterbury. (c) Catholic Bishops’ Conference of England And Wales.

The Lord Lieutenant and Lady De L’Isle were in the Precincts of Canterbury Cathedral to welcome the Hungarian Pilgrims who brought with them the relic of St Thomas Becket from the Basilica of Esztergom. The Pilgrims had visited Westminster Cathedral and Westminster Abbey in London before coming to Rochester Cathedral for an overnight stop, the last leg was a walk from St Mary’s Church, Harbledown, into the city centre and The Cathedral Precincts.

The Lord-Lieutenant greeting HE Mr Peter Szabadhegy, Ambassador of Hungary in the UK.    (c) Catholic Bishops’ Conference of England And Wales.

It is believed that the relic, part of Becket’s elbow bone, may have reached Hungary through the marriage of Queen Margaret who was first married to King Henry II’s son but was widowed and subsequently became Queen of Hungary.  Becket negotiated the marriage pact which brought her to England and would have been a major influence on her life.
King Henry VIII’s dissolution of the monasteries saw that Becket’s grave was destroyed and the jewels which decorated the tomb were removed and the worship of saintly relics discouraged as idolatrous.
During the communist era in Hungary Becket came to symbolise the struggle of The Church against the repression of religious liberty.

This Pilgrimage, after more than 800 years, is a vivid symbol of reconciliation between Anglicans and Roman Catholics. A Roman Catholic High Mass took place in the Canterbury Cathedral Crypt on Sunday 29th May before the relic was returned to Hungary.