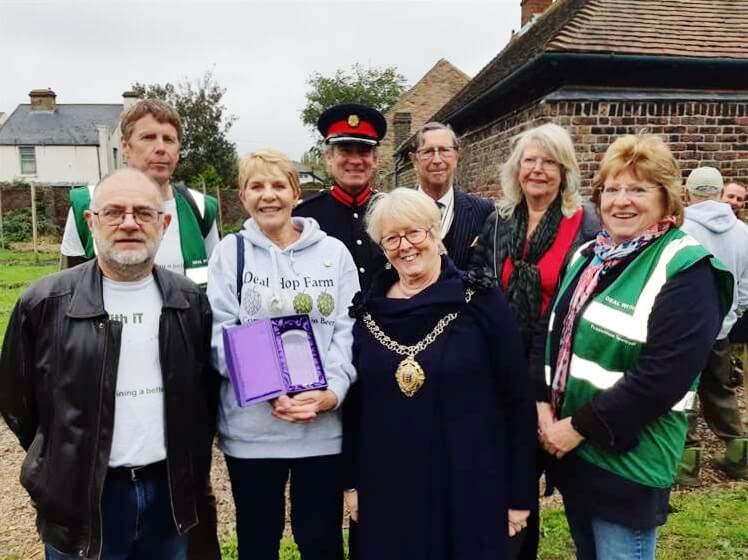 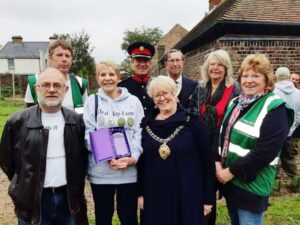 Deal With It has been awarded the highly coveted Queen’s Award for Voluntary Service, the MBE for volunteers, for its commitment to plastic reduction and other green initiatives, campaigning to make Deal a greener town. The Queen’s Award for Voluntary Service trophy was presented to the group by Vice- Lord- Lieutenant of Kent Richard Oldfield OBE at a gathering in the Captain’s Garden of Deal Castle. 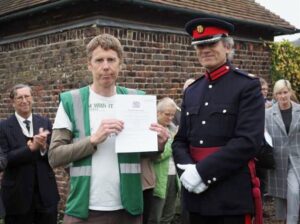 Stephen Wakeford receives the official documentation from the Vice-Lord-Lieutenant.

The award recognises the organisation’s commitment to regular beach cleans, seed swaps, green energy events, bee festivals, tree planting and litter picks.
Established 12 years ago, the group is also responsible for maintaining the community gardens at Deal Railway Station, The Landmark Centre and Captain’s Garden itself and schemes such as ‘Plastic Free Deal’.
Delivering the award, The Vice-Lord-Lieutenant said: “Maybe if you lived in Brighton, Dover or Margate, Deal With It would not have happened, but I suspect it would have because what you all show is an indomitable spirit and initiative. You have done these fantastic things which are transforming Deal and beautifying Deal and you’re enjoying it while you ‘re doing it.

Among the organisation’s campaigns is the Deal Hop Farm project to grow hops to make a local beer, which involves up to 300 people. Victoria Nicholls, Deal With It’s secretary and one of the founding members of the group, said: “The Hop Farm has been the catalyst in really bringing us to the forefront. We never thought it would come to this.”