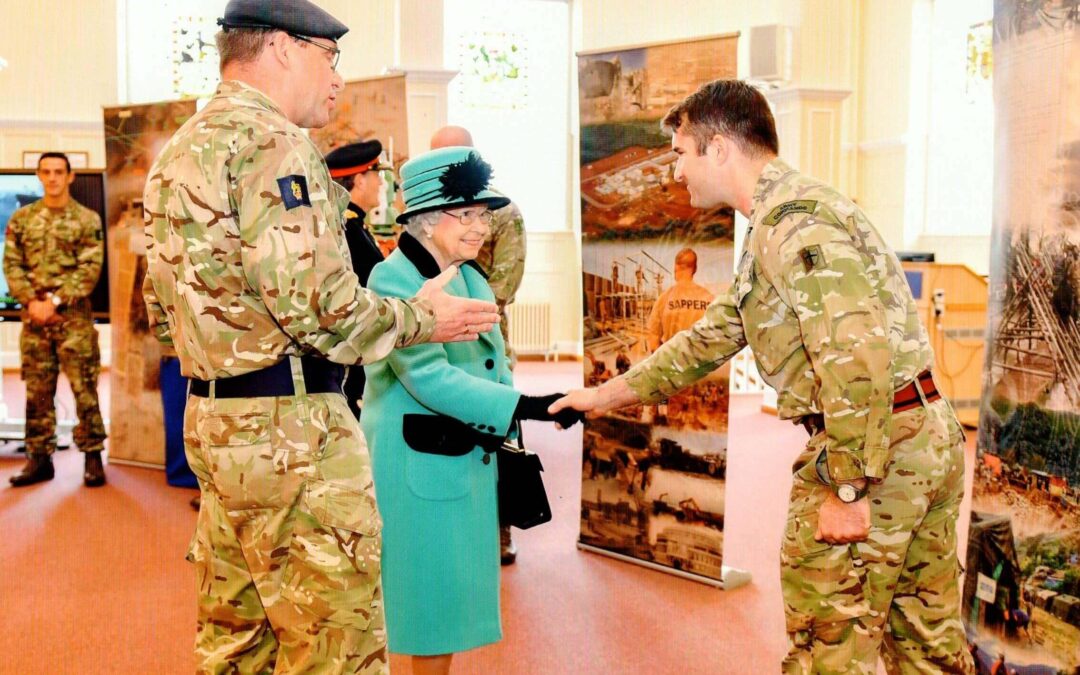 The Queen visited the Royal Engineers as their Colonel-in-Chief on 13th October 2016, to mark the 300th Anniversary of the Corps foundation.
The sun shone in the crisp autumn morning as Her Majesty arrived at Brompton Barracks. The Lord-Lieutenant, Viscount De L’Isle MBE; The Chief Royal Engineer, Lt-Gen Sir Mark Mans KCB CBE; Corps Colonel, Colonel Don Bigger ADC; and Corps RSM WO1 Chris McLennan greeted Her Majesty on arrival.

A Guard of Honour was formed up on the Parade Ground commanded by Lieutenant Colonel Sean Cunniff and greeted Her Majesty with a Royal Salute. The Queen inspected the Guard of Honour and Royal Engineer Plant parked round the side of the Parade Ground, this gave an opportunity for the many past and serving Sappers and their families to see her, before she returned to the Saluting Base, where General Mans welcomed The Queen concluding his address with a quotation from Rudyard Kipling:

“There’s only one Corps which is perfect – That’s us.
An’ they call us Her Majesty’s Engineers,
Her Majesty’s Royal Engineers.
With the rank and pay of a sapper”

The Queen was graciously pleased to reply:
“The Corps of Royal Engineers has served the Nation proudly since 1716.
Often at the forefront of operations. You and your families have always risen to those challenges. I congratulate you all on reaching this point in your long and distinguished service”.

Following the parade The Queen toured the Sapper 300 exhibition and spoke to members of the Corps about the exhibits. During the tour The Queen was presented with a sundial designed and produced by the Royal School of Military Engineering (RSME).
Following a group photograph with the Senior Officers, The Queen attended a reception in the Officers’ Mess, followed by an All Ranks lunch. The Queen departed across the Parade Ground led by the Corps Band and Cheered by a large number of people who had attended the event, including a number of Sapper Chelsea Pensioners from The Royal Hospital in Chelsea.

It was an impressive day which will long be remembered by all those who were present.