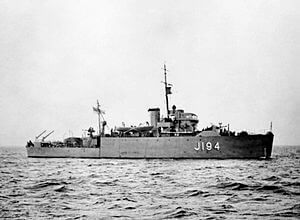 HMS Hythe was a cargo ship converted into a minesweeper, for service in the 1st World War.

3rd Kent Fortress Company was formed by Sir David Salomons and was one of the PALS Units raised in 50 towns across the country, enlisting men from the local area, in this case Southborough. The Company was formed in May 1915 by local volunteers and trained in Salomons’ converted Drill Hall on Speldhurst Road. It was originally planned for the Fortress Companies to man shore batteries on the coast. However the attrition rate on both the Western Front and in Mesopotamia were so great that the War Office was forced to deploy reinforcements.

3rd Kent Fortress Company set sail on 12th October 1915. Two weeks later they neared their destination and transferred to HMS Hythe for the final leg of their journey at Cape Helles, in the Gallipoli theatre of operations. Hythe was sailing as a “darkened ship” so as not to attract the attention of the Turks on shore. The preparations to disembark were under way, when the ship was struck by SS Sarnia a troopship, also “darkened” sailing out of the port. Hythe immediately began to fill with water and sank within ten minutes. Of the 154 who lost their lives that night 129 were from 3rd Kent Fortress Company, including the heroic Captain Salomons, Sir David’s son, who refused to abandon ship while any of his men remained aboard the stricken ship. This single incident left few families in Southborough without the loss of a father, son, brother, nephew or friend.

A short Drumhead Service was held at the War Memorial beside Tunbridge Wells Town Hall on 28th October 2015. A number of the descendants of those lost, attended. Almost at the minute of the collision 100 years on The last post was sounded and two minutes silence was observed.

Following the Service the Mayor entertained the descendants of men lost, with members of Royal British Legion, in his Parlour.