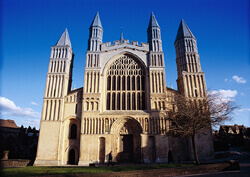 The Kent Lieutenancy Civic Service was held on the 10th March, 2015, in the splendid surroundings of Rochester Cathedral, in the presence of a congregation of over 600 people.

Here below is the Lord-Lieutenant’s address delivered at the Service.

‘We are gathered here this morning in the splendour of Rochester Cathedral and are lucky that the ceremonial county of Kent has the two cathedrals both over 1400 years old, each steeped in history.

Our thanks must go to The Acting Dean, Dr Hesketh, and Chapter and their staff who have made us so welcome, helping tirelessly with the arrangements, for this our eleventh Lord-Lieutenant’s Civic Service.

Allan Willett, my predecessor, conceived the brilliant idea of an annual Civic Service. Sadly neither Allan nor Anne Willett are able to be with us this morning, I know you would wish me to pass on our best wishes and prayers to them both. It was Allan who proposed that every year, about this time, we should come together to thank those, whose year in civic office will shortly end, while celebrating the contribution that is made by the large numbers of people in public life in our county– some highly visible and many unsung heroes. Today’s congregation of about 630 demonstrates the event’s continuing popularity and enduring support for our ceremonial county, which includes Medway within its borders. We must all thank the Allan Willett Foundation for funding the Service and the refreshments, which will follow.

I am delighted that so many people could be present – Civic Leaders of our county, Chairmen of Parish Councils, School Governors, The Clergy, Magistrates, representatives from the Armed Forces, Police, Emergency and Prison services, Queen’s Award winners and a multitude of individuals from a cross-section of voluntary organisations, and not least many of my own Deputy Lieutenants, all working for the public good. On behalf of Her Majesty I thank you all for what you are doing for Kent’s communities. You are doing Kent proud.

This year, The Lieutenancy is focussing on the bi-centenary of Wellington’s victory at Waterloo on 18th June 1815. This was the start of a long period of peace, which has become known as the Pax Britannica and lasted nearly a century, until Kent and the rest of the World was plunged into war once again, as we know from the centenary commemorations held all over Kent last year. On Saturday 20th June 2015 there will be a representation on the beach at Broadstairs of the arrival of Wellington’s Waterloo Dispatch, which will be rowed ashore from Cavalier, a Sea Cadet Training Ship accompanied, further off shore by HMS Iron Duke. The Dispatch will then travel to Canterbury Cathedral by post-chaise for a Service of Thanksgiving. Following this service a copy of the Dispatch will be presented in the Precincts. It will then travel on to St James’s Square London, where the original Dispatch was received by the Prince Regent along with two golden eagles captured during the battle, from the French Legions.

The following weekend there will be more events in Kent; on Saturday in Faversham, Sittingbourne and Rochester along the route the Dispatch would have taken in June 1815. Next day there will be a Regency fair at Walmer Castle, where the Duke died in 1852.

There will also be national events to celebrate the 800th anniversary of the sealing of the Magna Carta by King John at Runnymede on 15 June, 1215.

Kent can claim to have played a significant role in the introduction of law and order into England, which was linked to the introduction of Christianity, for King Æthelbert (590-616) took as his wife Queen Bertha, a Franc and a Christian. This led Pope Gregory to send St Augustine to Canterbury in 597, where he converted Æthelbert. During his reign over his Anglo-Saxon Kingdom, Æthelbert instituted laws which included a complex system of fines, probably better described as forfeits.

Rochester Cathedral was founded 7 years after Canterbury in 604 and was co-located with St Andrew’s Priory, incidentally you may observe the statue of King Æthelbert situated the second from the left on the Pulpitum screen in front of you.

History then moves on to Rochester home of the Textus Roffensis which is two separate mediaeval manuscripts written between 1122 and 1124 by a monk in the Priory. A  Textus is a book with a decorated cover suitable to be kept in the church by the high altar, a facsimile is present on the Altar today. The two volumes were bound in around 1300. The first part is a collection of the law of Æthelbert attributed to that King and the 1100 Coronation charter of King Henry I. The Law of Æthelbert is the oldest surviving code of English law and the oldestAnglo-Saxon text in existence.

The second part of the Textus Roffensis is the oldest of the Rochester Cathedral registers. The entire volume consists of 235 illuminated  vellum leaves, and can be studied on its own website.

The Coronation Charter of Henry I in the Textus, influenced the Barons when they drew up the Magna Carta.

Pictured here among the civic dignatories, are a number of Deputy Lieutenants who joined the procession too. (c) Barry Duffield.

Work is under way here to convert part of the crypt into an appropriate secure area to allow the Textus to go on permanent display. Please come and admire The Textus alongside the Faversham copy of the Magna Carta when both are on display next October, and tell all your friends to do likewise. Another significant link is that Rochester Castle was laid siege to by King John in his fight against the Barons, prior to the signing of Magna Carta. Sir Robert Worcester a Kent DL is chairman of the Magna Carta National Committee.

This leads me to another important part of the Administration of Justice. The role of the Lord-Lieutenant was instituted by King Henry VIII to defend the county from attack and maintain order, using the militia, the responsibility for this finally ceased in 1923, but the Lieutenancy continues to serve the Sovereign, while providing a focus for county identity, unity and pride, recognising achievements, and promoting service to others The Lord-Lieutenant also traditionally appointed Justices of the Peace, although the appointment of local Justices dates from 1360.

90% of all court cases in England and Wales are settled in Magistrates Courts. It is local justice dispensed to local citizens by Local Magistrates. There are currently 622 Justices in Kent, who sit on three benches North, Mid and East Kent.  Their selection is made by the Lord Chancellor’s Advisory Panel for Kent, of which I am ex-officio chairman. Today a wide variety of people from all backgrounds are volunteering to sit as lay Magistrates.  It has to be said that the age profile of the Benches is too high and it would be marvellous to attract younger men and women, who would be able to fit in their sittings, with their employment. Here I would ask employers to consider allowing employees leave of absence on sitting days. Justices must retire at 70.

Once selected by the Advisory Committee and sworn-in by the Liaison judge at Maidstone Crown Court all new magistrates complete a period of training before beginning to sit in Court. There are also Family and Youth courts, which require further selection and training before a Justice may sit on these panels. If you talk to serving magistrates I am certain they will tell you the work is both challenging and rewarding. I would ask anyone interested to look at the Magistrates Association website. I believe employers who are prepared to give employees time off will themselves be doing their civic duty and helping society, as a whole, across our county. As do those who employ Reservists and Special Constables.

We should consider ourselves most fortunate in this county to live in a realm ruled over by The Queen, the Head of our Church and State, with our democratic system which has evolved over the centuries. We have an independent Judiciary which includes Justices of the Peace. No government or legal system is perfect, but we should be honoured that through the coming of St Augustine to Kent we benefited both from Christianity and the Roman code of Law. As we leave this cathedral let us build on our proud past, hold to our faith, while striving to advance the cause of Kent.’