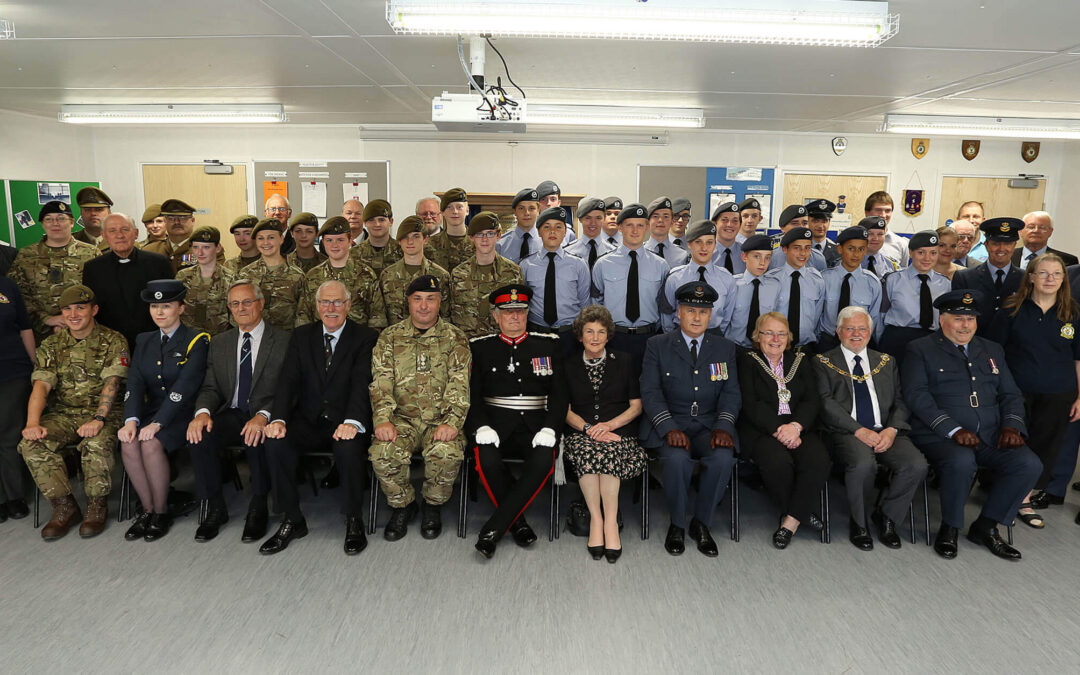 All attendees present who enjoyed the ceremony.(c) Stewart Turkington.

The Lord-Lieutenant Viscount De L’Isle MBE joined Army and Air Cadets from Canterbury and the surrounding area, at the official opening of their new Joint Cadet Centre at Leros Barracks, Sturry Road, Canterbury, on Thursday 16 July 2015.

The Lord Mayor of Canterbury and her Escort, Councillor Sally Waters and Mr Robert Waters, and the Deputy Leader of Canterbury City Council, Councillor Pat Todd, were among the local dignitaries who attended.
The new Centre will be home to approximately 40 Army and 40 Air Cadets and replaces both the old Canterbury Army Cadet Force Detachment accommodation in the Barracks, and, the 312 (City of Canterbury) Squadron, Air Training Corps’ building at the Cossington Road, Canterbury site, where the latter unit had been based for many years.  Both buildings had reached the end of their lives.

The City of Canterbury has long been associated with the Armed Forces and is steeped in military history: Leros Barracks has been a traditional base for both the Army Reserves (previously known as the Territorial Army) together with the Kent Army Cadet Force, for many years.
The new Joint Cadet Centre allows the benefits of synergy between the Army and Air Cadets in a new purpose built Centre sponsored by the military and saves money for the taxpayer.
Speaking before unveiling a plaque to mark the event Lord De L’Isle said:
“In all our Cadet movements Kent’s young people are acquiring self-discipline, teamwork, leadership, a sense of duty, pride in belonging to their units, and perhaps most importantly – good citizenship.”