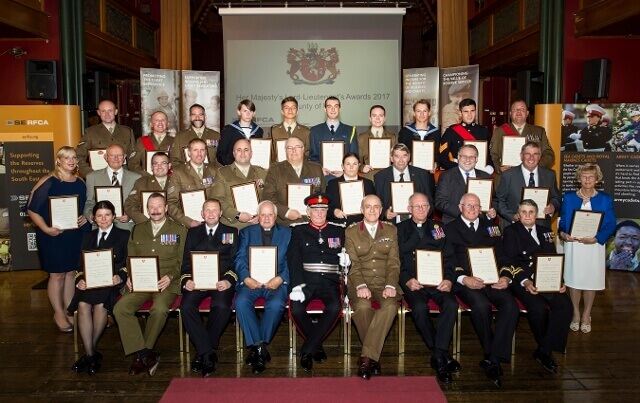 The Lord-Lieutenant of Kent, Viscount De L’Isle MBE held his annual awards presentation at the Salomon’s Estate in Tunbridge Wells on 26th September 2017. Twenty-two outstanding members of the Reserve Forces and Cadet Movements from all three services – Sea, Army and Air – were presented with medals and certificates in recognition of their dedicated service throughout the County.  In addition, the Lord-Lieutenant has appointed seven Lord-Lieutenant Cadets for 2018 who will accompany him on County engagements throughout the year.
The event was attended by the Chief Executive of SERFCA, Colonel Patrick Crowley with dignitaries from across Kent present to witness the ceremony, which was also attended by family, friends and colleagues of those receiving awards.
The Shepherd Neame Best Reservist Award winner was Lance Corporal Dan Campbell from C (Royal West Kent) Company, 3rd Battalion The Princess of Wales’s Royal Regiment. Chief Executive of Shepherd Neame, Mr Jonathan Neame DL presented the award.

Congratulating all the award winners, The Lord-Lieutenant said in his speech –

‘The Reserves are a vital asset to the nation, contributing to its security, its safety and its place in the world.  They are made up of volunteers drawn from across society, who are trained and equally equipped to work with the three Regular Services.
These men and women are well-respected and well-rewarded: they enjoy the kind of challenge and comradeship which are rare in civilian life and yet are able to balance military service with their responsibilities to their families and civilian careers. In the words of Field Marshal Lord Slim they are ‘twice the men and women’ as a result.
The support that you provide to these volunteers is extremely important and I urge you to continue to promote their commitment.  In particular, the volunteers need the support of employers that some of you represent or know; whether it is your giving Reservists time off to train or having Human Resources Reserves-friendly policies in place.  Your help is invaluable and in return you have people, who through their training and time on duty, are a great asset to your workforce on their return to work.
Similar support applies to the four cadet forces.  The cadets only flourish because of the dedication of the Adult Volunteers. I would like to repeat my plea for all of you to do what you can to encourage more adults to serve, as there is an increasing challenge to find adult volunteers across many civilian youth organisations as well as the cadets.  The four cadet forces provide fantastic opportunities to the cadets in developing their life skills for future careers and adult volunteer instructors gain great satisfaction in seeing their cadets thrive from their training and care, as well as honing their own management skills.
You have also heard from SE RFCA about how you can help these marvellous volunteer organisations.  I urge you to understand, support and encourage volunteer service in both the Reserves and Cadets.
None of this voluntary service is going to work without the support of families and friends.  I take this opportunity to thank them for the sacrifices they make for such worthy causes.’