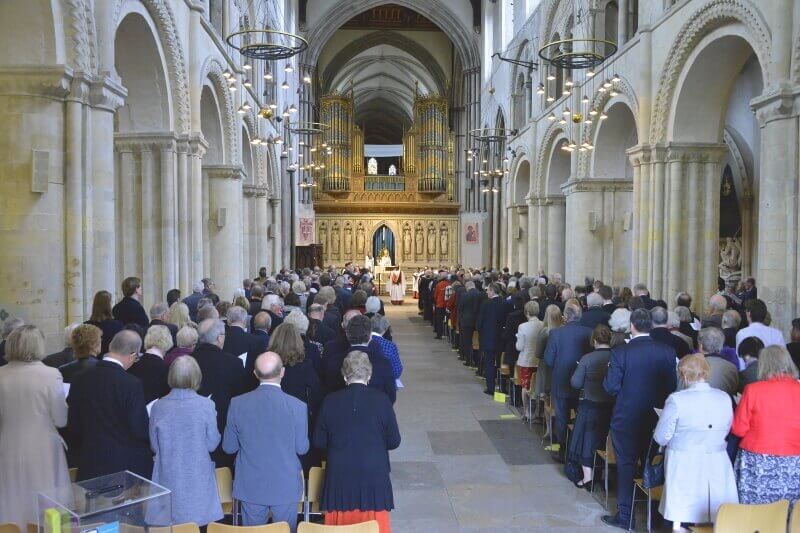 The Lord-Lieutenant of Kent is calling for more volunteers amid concerns that the volunteering spirit may not be as strong as it used to be.
Viscount De L’Isle has told a congregation of more than 550 in Rochester Cathedral that “the philosophy and motivation behind volunteering appears to have lessened in recent times.”

Speaking at the annual Service of Thanksgiving and Celebration for Public Service to Kent, attended by council leaders, school governors, magistrates, representatives from the armed forces, police, emergency and prison services, Queen’s Award winners, voluntary organisations, and Deputy Lieutenants, Lord De L’Isle paid tribute to the huge contribution made every day by so many people across the county.
“On behalf of Her Majesty the Queen, I thank you all for what you are doing for Kent’s communities. You are doing Kent proud. You are all standard bearers who lead the way to those who have lost the commitment to play a part and to volunteer to help our communities, as many have done in previous generations.
“You are doing a great job but we need to encourage more people to join you. The larger our numbers the less the burden, and more good works can be achieved.

As the Queen’s representative in the county, Lord De L’Isle recalled Her Majesty’s Christmas broadcast in which she singled out for special praise “ordinary” people like volunteers and carers who do “extraordinary” things.
“On our own, we cannot end wars or wipe out injustice, but the cumulative impact of thousands of small acts of goodness can be bigger than we imagine,” Lord De L’Isle said.

He praised volunteers in the Armed Forces and the Reserves, “often putting themselves in danger in the face of The Queen’s enemies” and “our emergency services who work year round saving lives.”
He commended the KM Charity Team for raising money for good causes. “I recently attended the KM Charity Team Awards ceremony at which 55 awards were given to thank those who had contributed both in cash and kind.”
There was praise also for Kent Community Foundation, which supported the Civic Service, for raising money for the Duke of Edinburgh’s Award scheme that encourages young people to develop self-confidence by undertaking challenges like
orienteering and expeditions. Kent now has the largest number of Gold Standard Award winners in the UK.
Lord De L’Isle said that was due to the scheme’s dedicated volunteers. But more were needed. “Kent youth organisations are desperate for more adult instructors and we all need to encourage people to take up this type of volunteering.” It was important to help “the next generation to realise their dreams.”
The 400 volunteers at Rochester Cathedral were a “ringing endorsement of the ethos of assisting the community,” he added.
Kent businesses and their staff also demonstrated corporate responsibility by raising funds for charity.
Lord De L”Isle said that voluntary organisations across Kent deserved more recognition, and he would welcome more nominations for the Queen’s Award for Voluntary Service (QAVS).
The annual Civic Service celebrates public service and volunteering across the county. It is held every year, alternating between Canterbury and Rochester Cathedrals, and All Saints, Maidstone.
Nominations for the Queen’s Award for Voluntary Service (QAVS) in 2018 can be made online at https://qavs.direct.gov.uk by September 15, 2017.
Kent Community Foundation, which supported the service, manages charitable funds for donors. www.kentcf.org.uk