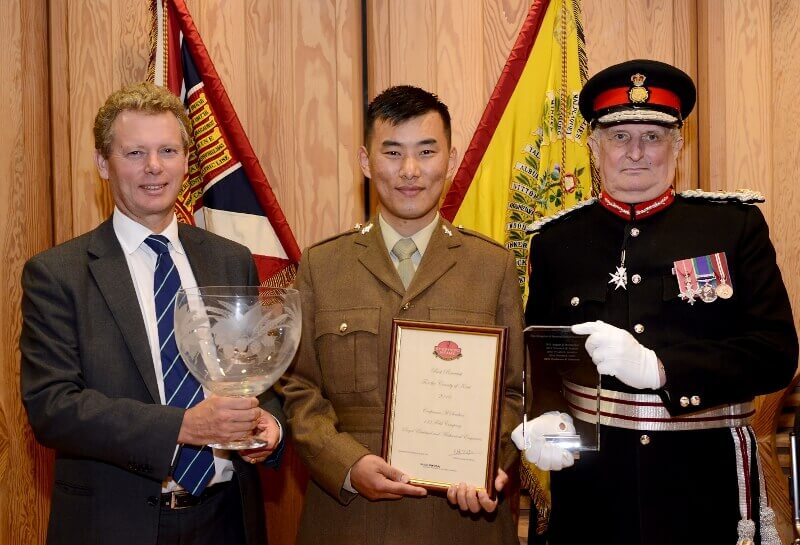 The Lord-Lieutenant of Kent, Viscount De L’Isle MBE held his annual awards presentation at The Canterbury Cathedral Lodge on 27th September 2016. Outstanding members of the Reserve Forces and Cadet Movements from all three services – Sea, Army and Air – were presented with medals and certificates in recognition of their dedicated service throughout the County.  In addition, he has appointed 3 Lord-Lieutenant Cadets for 2017 who will accompany him on County engagements throughout the year.

The event was attended by Colonel Andrew Wood, Assistant Commander of 11 Infantry Brigade, with dignitaries from across Kent present to witness the ceremony, which was also attended by family, friends and colleagues of those receiving awards.  Congratulating all the award winners, The Lord-Lieutenant said in his speech –

“I hope that you have been impressed by the demonstration of the volunteer ethos you have heard of from the citations of the worthy recipients.  I would like to thank everyone here in the Reserve Forces and Cadets,  on behalf of Her Majesty The Queen and Kent,  for their devoted service to society.
You have heard from Colonel Andrew Wood, Assistant Commander of our local 11 Infantry Brigade, concerning regional Defence issues.  The Reserves are a critical part of our Defence and are deployed on operations at home and overseas.  The support that you provide to these volunteers is extremely important.
I urge you to continue to encourage a wider knowledge of their commitment.
In particular, our volunteers need the support of employers that some of you represent or know; whether it is them giving Reservists time off to train or having Human Resources Reserves-friendly policies in place.  Your help is invaluable. Our Volunteer Reservists and Cadet movements are doing a spectacular job.
Their service does wonders for individuals’ personal development and employability, which should be taken into account when key members of your staff are deployed. The Ministry of Defence has revised and improved the compensation given to employers of deployed Reservists.
Similar support applies to the four cadet forces.  The cadets only flourish because of the dedication of the Adult Volunteers.  Unfortunately, they are dropping in numbers across the country and we need you to join us in encouraging more to serve.  The Cadet Movements provide fantastic opportunities to both the cadets and their volunteer instructors.”