New Waterloo Dispatch arrives with a fanfare in Kent, in the presence of HRH The Duke of Kent, 20th June, 2015 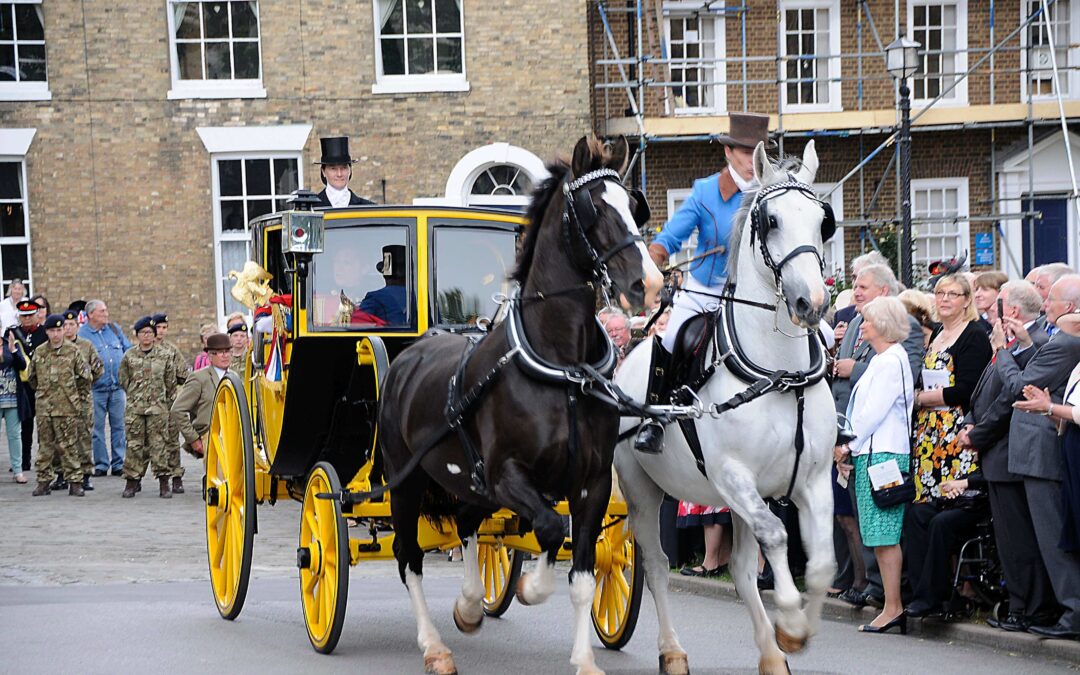 The New Waterloo Dispatch, the Duke of Wellington’s report of victory over Napoleon Bonaparte at the Battle of Waterloo, arrived to a fanfare in Kent. Two days and 200 years after the battle on June 18, 1815, a replica dispatch and two Imperial eagle standards, reached Kentish shores at Viking Bay, Broadstairs.

Years of planning by the Lord-Lieutenant of Kent, his deputies and many others, resulted in a number of exciting events in Broadstairs and Canterbury on Saturday June 20. HMS Northumberland, a Royal Navy frigate, was anchored in the Channel in view of more than 1,000 people lining the Esplanade and packing the beach at Broadstairs. They witnessed a re-enactment – or “interpretation” – by actors of the arrival of two officers who played such a crucial part in the original Dispatch.

Captain James White, who commanded HMS Peruvian, a Royal Navy sloop that Wellington’s aide-de-camp Major Henry Percy boarded to take the Dispatch to London, and Percy rowed ashore  – HMS Peruvian had been becalmed mid-Channel – and walked up the beach to huge applause.The Band of the Corps of Royal Engineers played while five re-enactors in period costume for the 41st Welsh Regiment of Foot, which took part in the battle in 1815, stood to attention.

The arrival of the Post-chaise in Broadstairs with interpreters representing Major Henry Percy and Captain James White. (c) Barry Duffield.

Major Percy presented a replica Dispatch to the Mayor of Broadstairs Councillor Rosalind Binks and unveiled a plaque to mark the opening of The Waterloo Way. Major Percy said: “I am here to tell you that fine British, Belgian and Dutch forces have met the Corsican ogre in the field and have dealt him the most shattering defeat.” Percy and White then left for Canterbury in a replica black and yellow post-chaise pulled by two horses.

They later travelled to London to present a replica dispatch to HRH The Princess Royal, retracing the journey on June 21, 1815, to tell the Prince Regent and Prime Minister of the historic victory.

From L to R: The Dean of Canterbury, the Very Revd Dr Robert Willis, HRH The Duke of Kent, Mr Nicholas Marden, Private Secretary to the Duke of Kent and the Lord-Lieutenant of Kent outside Canterbury Cathedral. (c) Barry Duffield

Viscount De L’Isle, Lord-Lieutenant of Kent, said: “Today we commemorate all those who took part in a very savage battle. There were many acts of heroism and bravery and all sides suffered heavy casualties and many families were ripped apart. The peace it brought was the first move towards a unified Europe that took another two world wars to achieve. He added: “Kent has a proud history of defending England from invasion and supporting our forces fighting in North West Europe. It is therefore most appropriate for us to commemorate this moment in history.” He added his thanks to Deputy Lieutenants of Kent Brigadier (Retd) David Ralls and Frank Martin, who were involved in two years of planning the anniversary events.

Young people have been involved in the project and after a competition, ten visited HMS Northumberland to see a working naval ship, all part of the Hungry for History project supported by broadcaster Peter Snow.

Later in the day, hundreds of guests joined HRH The Duke of Kent in Canterbury Cathedral for a special Service of Commemoration.

This was followed in the Cathedral Precincts by the arrival of Major Percy and Captain White in the post-chaise, the presentation of a replica dispatch to the City of Canterbury, and a stunning display by the Corps of Drums, young people from the Duke of York’s Royal Military School, Dover.