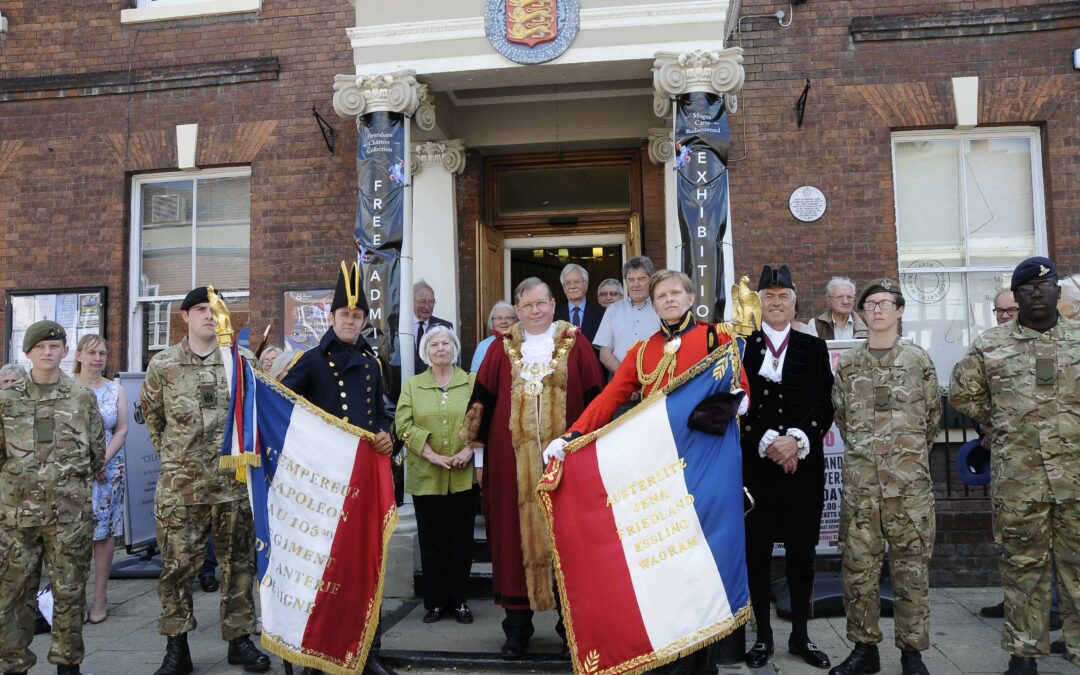 A poignant and entertaining series of commemorative events for the New Waterloo Dispatch (NWD) culminated in colourful drama in Faversham, Sittingbourne and Chatham.
They were a fitting climax to the series of events across the county on June 20 and 27 to mark the 200th anniversary of the Battle of Waterloo.
They were led by the Lord-Lieutenant of Kent Lord De L’Isle, assisted by a number of Deputy Lieutenants.
NWD national chairman Peter Warwick praised the organisation of the events. “They’ve gone brilliantly,” he said. “Right from the start when Percy and White landed on Broadstairs beach, I couldn’t have imagined it better. There’s been a great turnout. Events in Faversham, Sittingbourne and Chatham complete the picture because Kent played such a huge part in the story.”
Excited crowds in the two Swale towns shouted “God Save the King” after the arrival of interpreters of Major Henry Percy, Wellington’s aide-de-camp, and James White, captain of HMS Peruvian, in a replica black-and-yellow post-chaise drawn by two horses.
They emerged from the vehicle with two Imperial Eagle Standards, waving their impressive hats at spectators gathered outside the Alexander Centre, Preston Street, Faversham.
Percy proclaimed: “After so many good years, good people, the wars are finally at an end and we may look forward to re-drawing the map of Europe in the coming time of peace. God bless the Duke of Wellington and his victorious soldiers.” Percy presented a replica Dispatch to the Mayor of Faversham Cllr Nigel Kay.

Philippa Ewart, a descendant of Charles Ewart who captured the French colours at Waterloo, atttended the ceremony. She said: “I’m a bit emotional.”
Sittingbourne Retail Association staged a street fair in the town to coincide with the historic events outside The Red Lion.
Lord and Lady De L’Isle, the Mayor of Swale Cllr Anita Walker, cadets, veterans and re-enactors welcomed White and Percy who also presented the Mayor with a replica Dispatch.
Mr Warwick presented the Mayors of Faversham and Sittingbourne with a book about the Battle and a carton of specially blended Waterloo tea to mark the anniversary.
A further ceremony was held at the Great Lines, Gillingham, as part of Armed Forces Day.

Lord De L’Isle said: “I am delighted with the success of the Waterloo events across Kent and Medway, and thank the Deputy Lieutenants and others who worked tirelessly to make them go so well.

“I hope the public and young people enjoyed what they saw, and that the events helped them learn more about one of the most important battles in British history, the outcome of which in many ways shaped our lives today.”
Mr Warwick added that the events were not the end of the Waterloo 200 commemoration. “The great thing about what happened at Waterloo was that Europe came together and delivered a long period of peace. It’s a role model that the New Waterloo Dispatch is trying to promote. We will now talk about peace rather than war.”