Presentation of The Queen’s Award for Voluntary Service to the Kent Police Special Constabulary, 18th October, 2014. 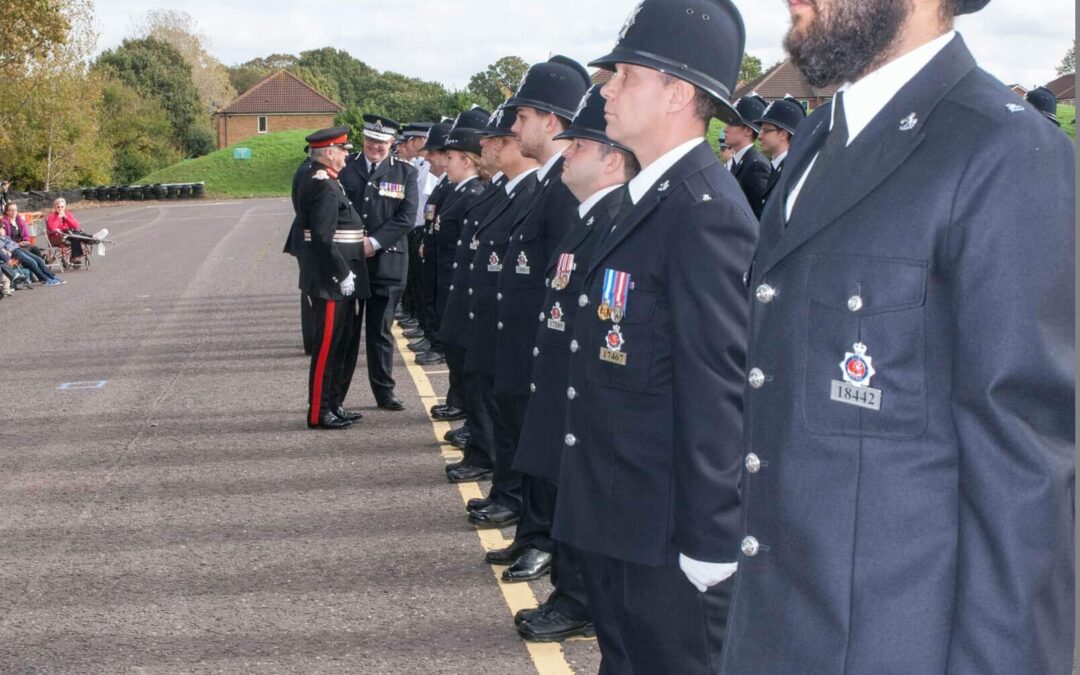 The Lord-Lieutenant inspecting The Parade before presenting the prestigious award. (c) Phil Pemble.

In June this year it was announced that the Kent Special Constabulary had been given the prestigious award by Her Majesty the Queen in recognition of its service to residents in Kent.  They are the first Special Constabulary ever to be presented with the award  and the officers were recognised for providing innovative community focused policing to the people of Kent.

Special Constables from across Kent gathered in Maidstone at the Kent Police Training School on the 18th October, to be presented with the Queen’s Award for Voluntary Service by the Lord Lieutenant of Kent, Viscount De L’Isle.

Special Constables are volunteers who have full police powers and equipment, and work alongside regular police officers. Contributing a minimum of 16 hours per month, Kent’s Special Constables have so far this year contributed 80,000 hours of policing, which resulted in 470 arrests, including 40 drink drivers. Each month they perform an average of 1,500 hours of walking the beat on the streets of Kent, and they have attended 8,000 calls for assistance from the public so far this year.

Members of Kent Special Constabulary at the awards ceremony, accompanied by The Lord-Lieutenant. (c) Phil Pemble.

Chief Constable Alan Pughsley said: ‘I’m exceptionally proud of the Special Constabulary in Kent. They are extremely community spirited and every week they volunteer their own time to police the county, doing the same job as their regular colleagues. Our volunteers come from so many walks of life and integrating volunteers into the force in this way introduces so many different skills sets into Kent Police and makes us a better police force. I would like to extend my sincere thank you to every single one of our brilliant specials for their contribution to keeping Kent safe.’

The Lord Lieutenant of Kent, Viscount De L’Isle said ‘This is a great day for everyone who has, and is, serving in the Special Constabulary of Kent. This award marks the respect in which the Queen holds all those who give voluntary service to their community.’

Gavin McKinnon, the Chief Officer of Kent Special Constabulary said ‘We are very proud of our achievement of this hallmark of excellence, and the recognition it brings to the hard work, dedication and commitment that volunteer police officers in Kent demonstrate every day in support of the regular police force and in the service of their community. Serving as a Special Constable is a decent and honourable calling, and a really great way to give something back to society by helping keep people safe and working to solve issues in the community.’