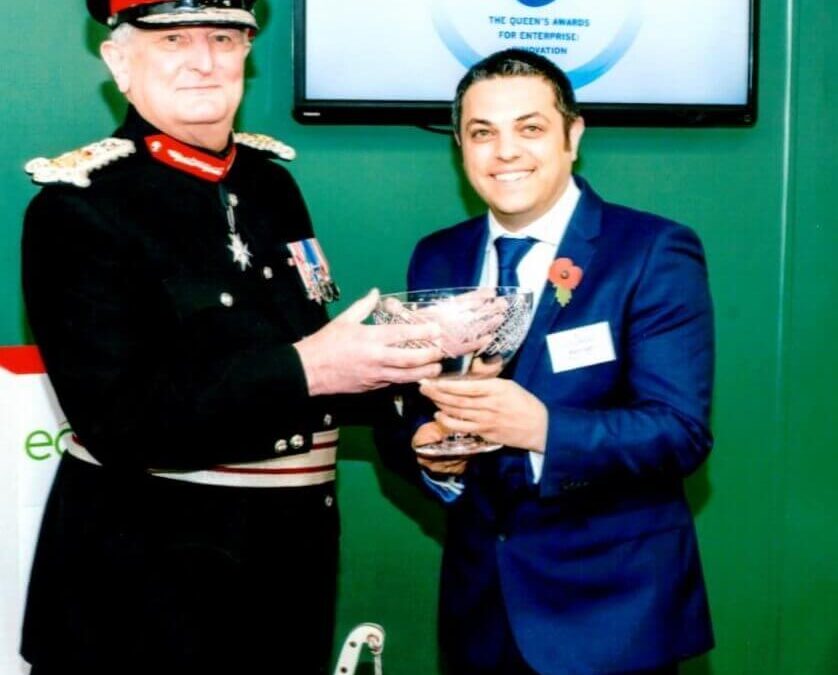 ecoegg, a laundry products manufacturer which makes environmentally-friendly washing pellets, was presented with a Queen’s Award for Enterprise by the Lord Lieutenant of Kent, Viscount De L’Isle, only five months after the company’s former premises were devastated by fire.
Founder and managing director Rob Knight accepted the honour at the company’s new headquarters in Gillingham.
In June, the firm lost about £2 million in lost revenue and stock after the blaze wiped out its unit at Integra Business Park in Park Wood, Maidstone.
Despite that, the company has increased turnover by 60% this year, employing 48 people at its new premises at The Hatchery, Steelfields, in Medway.
It exports about 65% of its products, most of which are made in the UK. It has plans to expand distribution to Canada, China and Japan in 2017.

Mr Bill Ferris OBE DL who read the citation at the ceremony, is seen here being greeted on arrival by an ecoegg employee! (c) John Phipp, The Photo Team

Mr Knight said: ‘It was great to be able to come together with everybody to celebrate the Queen’s Award win and put the fire behind us.’
The firm was founded in 2008 after Mr Knight developed laundry detergent pellets that were suitable for sensitive skin, which are placed inside its laundry egg capsule.
The company has sold more than 1.2 million units since launching – the equivalent of more than 1 billion wash loads. It has also gone on to develop a range of cleaning products for dryers and kitchens.
Mr Knight said: ‘Innovation drives everything we do at ecoegg, and the laundry egg along with our growing range of other eco-friendly products, have each revolutionised the categories in which they compete.’

The Lord-Lieutenant stated in his speech: ‘You deserve the greatest admiration for the excellent work you are doing and I know you will continue to do. Very well done to you all, and long may Ecoegg flourish.’