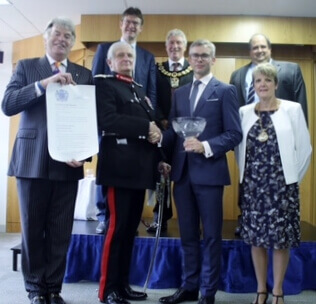 The Queen’s Award for Enterprise in International Trade was awarded to AXA PPP on the 9th September, 2016 and it recognises the substantial and sustained increase in export earnings over three consecutive 12-month periods  for the company. The  award, in the form of a crystal bowl, was presented by Viscount De L’Isle, the Lord-Lieutenant of Kent, who was last at the company to present The Queen’s Award for Enterprise in the International Trade sector in September 2011, and to open the company’s new offices.

The Lord-Lieutenant said of the Award:
‘May I once again congratulate everyone at AXA PPP International who has contributed to your continuing remarkable success. It is always a great pleasure to present these awards on behalf of Her Majesty, to victors based in Kent, that are making their names around the world and especially for a second award within five years. If you continue to win awards at this rate you will need to enlarge your trophy cabinet!
Today’s award again recognises what is an exceptional achievement by any standards – especially at a time of uncertainty, as Trade links with the European Union are being changed. This will mean we all need to seek out new markets across the world and build strong links with other nations. A great amount of dedication and effort by everyone in the team goes into achieving and maintaining the success recognised by this Award. I congratulate and thank each and every person involved in the company’s remarkable success story and for what you are achieving from your base in our great County of Kent.’

The International Managing Director for AXA PPP, Tom Wilkinson, said he was thrilled by the company’s recent achievement of the Queen’s Award for Enterprise in International Trade.
Guests at the celebration for the award included the Tunbridge Wells Mayor Councillor David Neve and Deputy Lieutenant George Jessel.