Successful book launch for ‘Unconquered – The Story of Kent and Its Lieutenancy’, 8th April, 2014 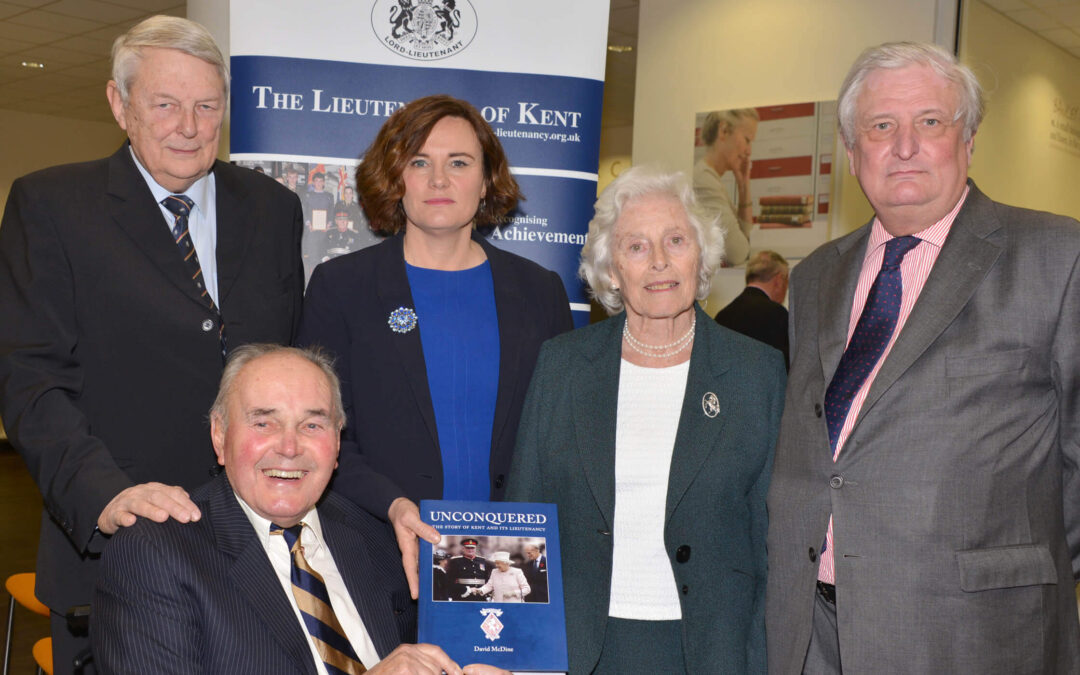 Guests from all over the county gathered at the new Kent History and Library Centre, Maidstone, on 8th April for the launch of  Unconquered – The Story of Kent and its Lieutenancy.

Speaking during the event, attended by more than 130 guests, the Lord-Lieutenant, The Viscount De L’Isle, said: ‘This book represents another first for our county in that we are the first to produce an in-depth history of the Lieutenancy and the important role it has played over 500 years of our extraordinary history.’

The 276-page book, fully illustrated in colour throughout, is published by the Allan Willett Foundation and any profits from its sale will go to mainly Kent-based and medical charities.

Welcoming guests, Mike Hill, the Kent County Council Cabinet Member for Communities, said: ‘The County Council is delighted to be associated with the launch of this book which tells the hitherto largely unknown story of an office that has played such an important role in the county’s history

‘It is entirely appropriate that the launch should take place here, at the Centre, purpose-built to protect and give people access to more of our archive material, and to provide a 21st century library in the heart of Kent.

‘The Centre houses around 14 kilometres of historic material relating to Kent dating back to 699 AD and is the place to come for anyone interested in our county’s fascinating history.

‘Since it opened two years ago it has issued almost 360,000 items, provided more than 100,000 computer sessions, seen a 23 per cent increase in children’s book issues, and, by the way, registered the births of over 3,880 babies – a remarkable success story.

‘This year we commemorate the 100th anniversary of the start of the First World War and Kent Libraries, Registration and Archives has a strong involvement in the centenary programme, especially in supporting the commemoration work of community groups and organisations across the county.

‘The anniversary is being marked here at the Centre with our Kent and the First World War Timeline on the ‘Time Spiral’ feature in the foyer. It offers a taster of the huge range of resources available to members of the public using our services to explore Kent’s First World War heritage.’

Lord De L’Isle said there was no more fitting venue for the launch of this exciting and important addition to the knowledge of our Frontline County’s proud history than at the Centre, one of the premier County Record Offices, where many of the documents relating to the Lieutenancy are archived.

‘I was privileged to accompany His Royal Highness The Duke of Kent when he officially opened this state-of-the-art Centre in December 2012 and he forecast – correctly – that people would flock from near and far to make use of this wonderful asset. I congratulate all those who have played a part in making it such a great success story.

‘The Duke of Kent has also provided the Foreword for Unconquered, writing of the great affection he and his family have for our county and its people.’

Quoting the Foreword, he said:  ‘Kent has always been in the vanguard of the nation’s history and from Tudor times the Lieutenancy played a crucial part in the maintenance of law and order, local defence – and many other functions that have since devolved to other bodies.’ These included both Kent County Council and Medway Council and the districts and boroughs represented by guests attending the launch.

Lord De L’Isle said it was retired Deputy Lieutenant David McDine’s idea to research and write the book and it was former Lord Lieutenant Allan Willett’s strong support for the project that made publication possible.

‘I am lucky in that the project has come to fruition during my term of office and I had the pleasure of pushing the button to start the press rolling for the printing of Unconquered at Headley Brothers, Ashford.

‘The book has been written, illustrated, designed and printed to very high quality in Kent, by Kentish people, for the people of Kent – and for the wider audience nationally and internationally.

‘My hope is that Unconquered will go into all Kent schools and libraries and that people of all ages will enjoy discovering the hitherto largely unknown story of an office that has played such an important role in the county’s history.

‘I not only congratulate all involved in producing this attractive book, but, echoing The Duke of Kent’s foreword, I commend The Allan Willett Foundation for making this publication possible.’

Mrs Kate McCorquodale, Chair of the Trustees of The Allan Willett Foundation, thanked the Lord-Lieutenant and Kent County Council for hosting the launch and congratulated all those involved in producing the book which was, she said: ‘a credit to the Frontline County’.

She said that when her father set up The Allan Willett Foundation some 10 years ago he identified a key aim as being support for ventures for the benefit of people living, working or being educated in Kent.

‘This aim has been achieved through support for among others Canterbury and Rochester Cathedrals, the New Marlowe Theatre, the Turner Contemporary Gallery and many other causes including medical research.

‘Allan’s aspiration throughout his Lieutenancy was ‘to celebrate Kent, its unique history and culture, serve its communities – and contribute positively to its future.’

‘And, as Trustees of the Foundation, we believe this book firmly ticks all those boxes. It is an important part of Allan’s legacy to Kent.’