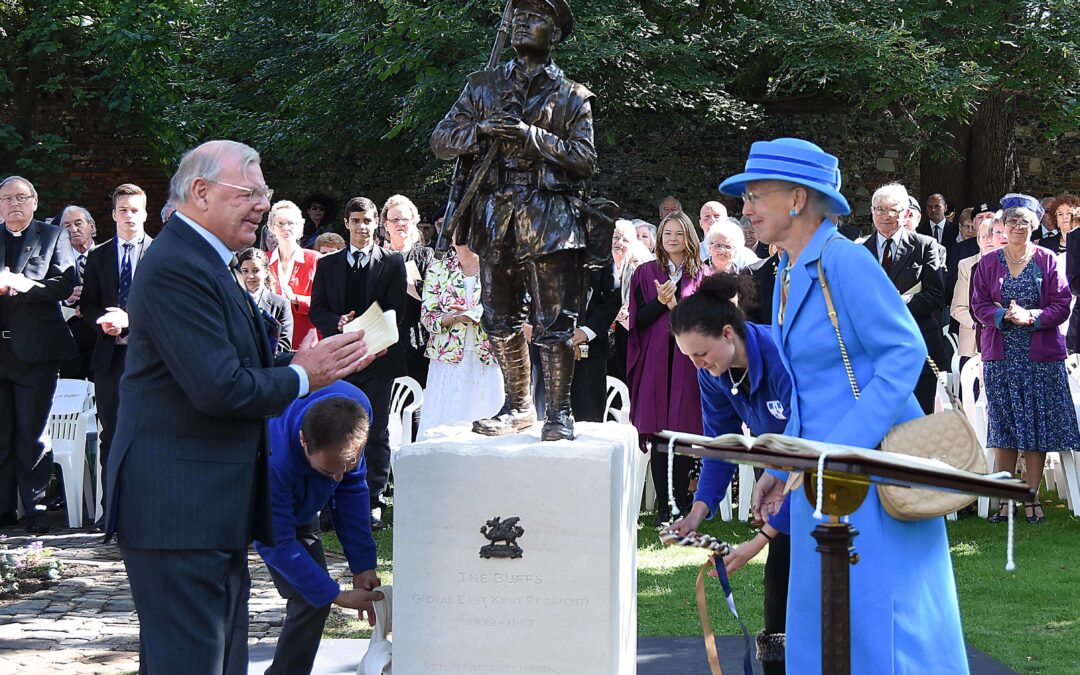 The Unveiling of The Buffs Statue by Queen Margrethe II of Denmark took place in bright sunshine in the Precincts of Canterbury Cathedral on Friday 11th September.  In order to provide a lasting memorial to The Buffs in Canterbury and the men of Kent who gave their lives over the centuries, a statue was commissioned reflecting the sacrifice of the 5,688 Buffs who died in the First World War.

Pictured at the statue unveiling ceremony: Colonel Peter Bishop OBE DL President of the Queen’s Own Buffs Regimental Association with HM Queen Margrethe II of Denmark, Colonel in Chief of the PWRR, the descendant regiment of The Buffs. (C) Barry Duffield DL

The Buffs have been associated with the Royal House of Denmark since 1689 when HRH Prince George was appointed Colonel in Chief. In 1906 King Frederik VIII was appointed Colonel in Chief and since then successive monarchs have held that appointment. Queen Margrethe is the current Colonel in Chief of the descendant regiment, The Princess of Wales’s Royal Regiment, and agreed to unveil the statue  in recognition of the longstanding association of the Royal House of Denmark with The Buffs.

The 50 inch high bronze Statue was produced by Gillingham-based sculptor Mr Peter Birkett, and is based on the painting Man of Kent, by  Lady Butler.

Background History
The Buffs (Royal East Kent Regiment), formerly the 3rd Regiment of Foot, was a line infantry regiment of the British Army. It had a history dating back to 1572 and was one of the oldest regiments in the British Army, being third in order of precedence (ranked as the 3rd Regiment of the line). The regiment provided distinguished service over a period of almost four hundred years accumulating one hundred and sixteen battle honours. In 1881 under the Childers Reforms it was known as the Buffs (East Kent Regiment) and later, on 3 June 1935, was renamed the Buffs (Royal East Kent Regiment).
In 1961 it was amalgamated with the Queen’s Own Royal West Kent Regiment to form the Queen’s Own Buffs, The Royal Kent Regiment which was later merged, on 31 December 1966, with the Queen’s Royal Surrey Regiment, the Royal Sussex Regiment and the Middlesex Regiment (Duke of Cambridge’s Own) to form the Queen’s Regiment  which was again amalgamated with the Royal Hampshire Regiment, in September 1992, to create the Princess of Wales’s Royal Regiment (Queen’s and Royal Hampshires).