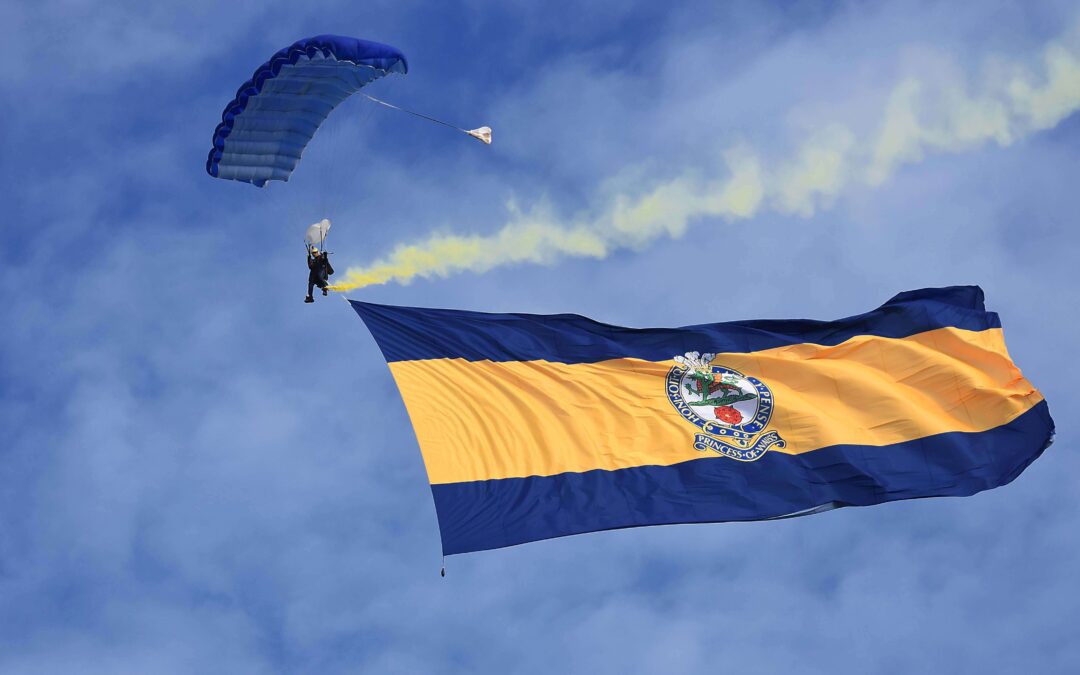 Three of  the Four Battalions of PWRR were presented with New Colours at Canterbury Cricket “Spitfire” Ground on Saturday 23rd September, 2017.
The recently re-formed 4th Battalion PWRR of Reservists marched on to parade to join their sister battalions.
Queen Margrethe II of Denmark, Colonel-in-Chief of the Regiment, was to have presented the new Colours but sadly she was unable to be present, so her place was taken by her Danish Ambassador to the United Kingdom, HE Lars Thuesen, who had only recently assumed the appointment.
The Presentation coincided with the 25th anniversary of the Regiment’s formation, being a composite Regiment of previous Regiments recruited in Kent, Sussex, Surrey and London, all with proud histories of Service to the Crown. This enabled many serving members of the Regiment and a large number of Old Comrades to attend and celebrate in style.

The three battalions to receive new Colours marched on to the cricket ground and their old Colours were marched off, to be “laid up” at a future date. The new  Colours were marched on  cased and then uncased and laid on Drums piled in front of each battalion. The Colours were blessed by the Deputy Chaplain General, The Venerable C Langston QHC. After, the Ambassador gave each battalion their new Queen’s and Regimental Colours.
HE Lars Thuesen, the Danish Ambassador, addressed the Regiment and the Colonel of the Regiment, Major General Doug Chalmers DSO OBE, was pleased to reply.
The Regiment then marched past the Ambassador in Slow and Quick Time before being marched off at the end of a most successful parade which was much admired by all who were attending.

Following lunch the Regimental Band of PWRR and Pipes and Drums gave a musical and marching performance. The day ended with a display by The Flying Tigers Freefall Team jumping into the cricket ground, including one parachutist displaying a giant Regimental Flag.