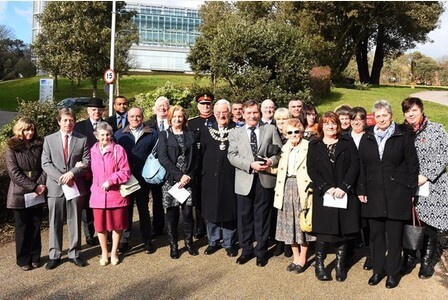 The Lord-Lieutenant of Kent and the Chairman of Sandgate Parish Council, Cllr Robert Bliss, arriving at St Paul’s Church, for the Service of Commemoration. (c) Barry Duffield DL

Exactly a century after Corporal Cotter’s act of bravery for which he was awarded  the Victoria Cross, a Service of Commemoration organised by Sandgate Parish Council (Chairman Robert Bliss) was held at St Paul’s Church Sandgate, followed by the unveiling of the slab set into the pavement adjacent to the Sandgate War Memorial.

Members of the Cotter family who attended the unveiling ceremony pictured with the Lord Lieutenant of Kent and Cllr Robert Bliss. (c) Barry Duffield DL.

Members of the Cotter family attended and were joined by L/Sgt Johnson Beharry VC, Princess of Wales’s Royal Regiment, the successor Regiment of the Buffs (East Kent Regiment).

A large number of The Buffs Association and the Regimental Association Standards were on parade. The Lord-Lieutenant took the salute and was joined by five Deputy Lieutenants, The Mayor of Sangatte, France and many other members of the public were also present. A reception was held, following the unveiling at the Saga Pavilion.

The parade leaving St Paul’s Church after the service led by the band of the Band of the Princess of Wales’s Royal Regiment from Canterbury. (c) Barry Duffield DL

The following citation was published in the London Gazette on 31st March 1916.
`No 6707 Lance Corporal (Acting Corporal) William R. Cotter, East Kent Regt. – For most conspicuous bravery and devotion to duty. When his right leg had been blown off at the knee and he had also been wounded in both arms, he made his way unaided for fifty yards to a crater, steadied the men who were holding it, controlled their fire, issued orders, and altered the dispositions of his men to meet a fresh counter attack by the enemy. For two hours he held his position, and only allowed his wounds to be roughly dressed when the attack had quietened down. He could not be moved back for fourteen hours, and during all this time had a cheery word for all who passed him. There is no doubt that his magnificent courage helped greatly to save a critical situation. Sadly Corporal Cotter later died of his wounds but not before he had been decorated with his VC medal ribbon, while being nursed in a Field Hospital.’

William Cotter is buried in the Lillers Communal Cemetery, France.

After the unveiling of the Paver, from left: Colonel Peter Bishop DL, Presidentof the Regimental Association of the Queen’s Own Buffs (PWRR) The Royal Kent Regiment; Cllr Robert Bliss, Chairman of Sandgate Parish Council; The Lord-Lieutenant of Kent, Sgt Johnson Beharry VC and Mr Alex Cotter and his mother. (c) Barry Duffield DL