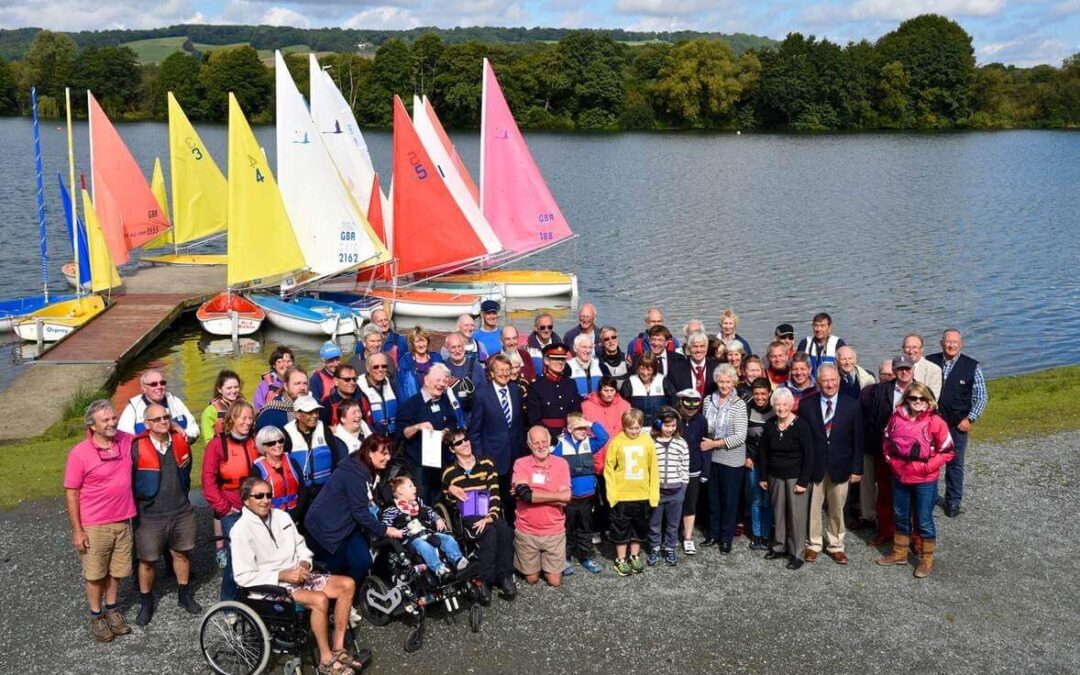 Wealden Sailability, a Sevenoaks charity that provides people with disabilities the chance to learn to sail  has been presented with the Queen’s Award for Voluntary Service by the Vice Lord Lieutenant of Kent, Mr Richard Oldfield.
The accolade is the highest award given to volunteer groups across the UK, and the Vice Lord Lieutenant made the official presentation of the crystal trophy and the plaque signed by Her Majesty The Queen in front of more than 100 Wealden Sailability volunteers, clients, carers and guests at the organisation’s Chipstead Sailing Club base.
Wealden Sailability supports more than 60 people a week, with a whole range of physical and learning disabilities, in getting out on the water every Tuesday and Thursday between April and October.

Established in 2008, with no money or boats, Wealden Sailability has grown from being a small group of enthusiastic sailors wanting to help people with disabilities enjoy the fun and independence sailing offers, to now having some 21 specially-adapted boats and enjoying outstanding relationships with many local community groups and independent sailors. There are now over 80 volunteers.
The plaque was presented to Brian MacCormack, one of the original volunteers but following a severe stroke and over three months in hospital is now a client, while the crystal trophy was handed to Meg Warren, another long-time volunteer. The Vice Lord Lieutenant was supported by Deputy Lieutenants, Mr Douglas Horner, who read the citation, Lord Sackville and the High Sheriff of Kent, Mr William Alexander.

From left: Mrs Eileen MacCormack; Mr Brian MacCormack being presented with the certificate on behalf of Wealden Sailability by the Vice-Lord-Lieutenant, Mr Richard Oldfield, and in the background, Mr David Mckee (c) David Barker.

Brian Stanley, Founder Trustee of Wealden Sailability, said: “The presentation event took place on a normal operational day so that the Vice Lord Lieutenant could see Wealden Sailability in action and he even joined the clients on the water in a Laser Stratos boat.”
Wealden Sailability’s philosophy is to encourage its sailors to develop their sailing skills so that they may aim towards achieving personal goals, which may be simply to enjoy the freedom of being on the water, or to progress to taking full control and sailing solo, or even to learning to race.
For more information on Wealden Sailability visit www.wealdensailability.org