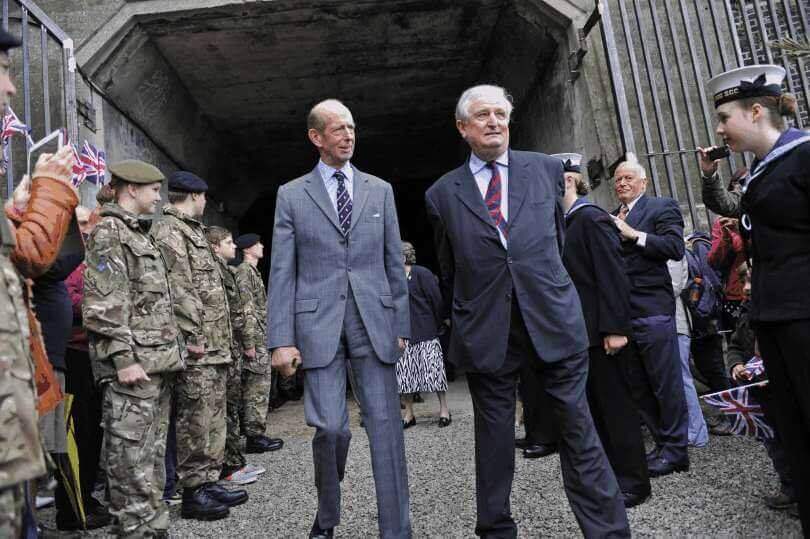 HRH The Duke of Kent accompanied by the Lord Lieutenant of Kent at the Ramsgate Tunnels.

HRH the Duke of Kent visited Ramsgate on 27th May. Ramsgate Tunnels were completed in June 1939 as air-raid shelters and opened by The Duke’s father. The far-sightedness of the Mayor and Borough Surveyor saved many lives during WWII and provided shelter to those who lost their homes in the bombing. The tunnels have remained closed for many years. Entrances to the tunnels were constructed to ensure easy access from different parts of the town, thus saving many lives. Residents, whose houses were destroyed in the raids were able to live in the tunnels until alternative accommodation could be found. HRH opened the first stage of the restoration which it is hoped will become a major tourist attraction. https://www.youtube.com/watch?v=d18mmxHbwT4

The Royal Temple Yacht Club Academy Trust exists to promote the advancement of amateur sport and, in particular, the provision of facilities and assistance to enable and encourage young people to participate in sailing and motor boating. The Trust was approved at the  club’s 2011 AGM and was finally formed in January 2013. Funds from this Trust will be used to enable on water activities for young people where the need for funding meets the Trust criteria.

For the last two years the Trust has targeted students of 15 and 16 years of age at three local secondary schools. Up to 20 students are given 8 x 2 hour Theory lessons and then they are offered the opportunity of joining the crews aboard their racing fleet. Last week saw the first of this year’s sailing sessions and they had 16 Academy Students on the water.  There are already 6 students from last year who are now permanent crew members. The Duke of Kent presented 21 successful students with their certificates.

Augustus  Pugin, a leading architect of the Gothic Revival, is best known for designing much of the Houses of Parliament. He converted to Roman Catholicism in 1835, and he came to live Ramsgate in 1844.  Having built The Grange, Pugin set about building his “flint seaside church” next door. As well as the building, he designed much of the stained glass, furnishings, tiles, and many moveable items too. Pugin designed according to his “true principles of Christian architecture” –emulating English Gothic – and this is the only church he built with his own money, that is without the influence of patrons. Thus he considered this design to be one of his truest, and he called it “my own child.”  Father Marcus Holden, the Rector, took the Duke of Kent on a short tour explaining the recent restoration work and plans for the future.

Now entering its seventh year of operation, Thanet Earth Marketing currently employs a team of 165 across the packing factory, commercial and technical staff, accounting staff and site support services.  Including the greenhouse teams and the flexible agency teams, the Thanet Earth site currently provides work for around 600 people at peak periods, in a mixture of skilled and manual roles, where possible locally recruited. Tomatoes, cucumbers and peppers are grown at the site.

The Duke of Kent visited the 18 Hectare TG1 greenhouse growing premium quality tomatoes, 6% of the tomatoes sold in the United Kingdom are grown here in a controlled environment, for sale in British Supermarket chains year round.

Ongoing trials of some 100 different varieties take place at Thanet Earth and in partnership with Hadlow College in Kent. Research projects are undertaken with the aid of grant funding and university academics.