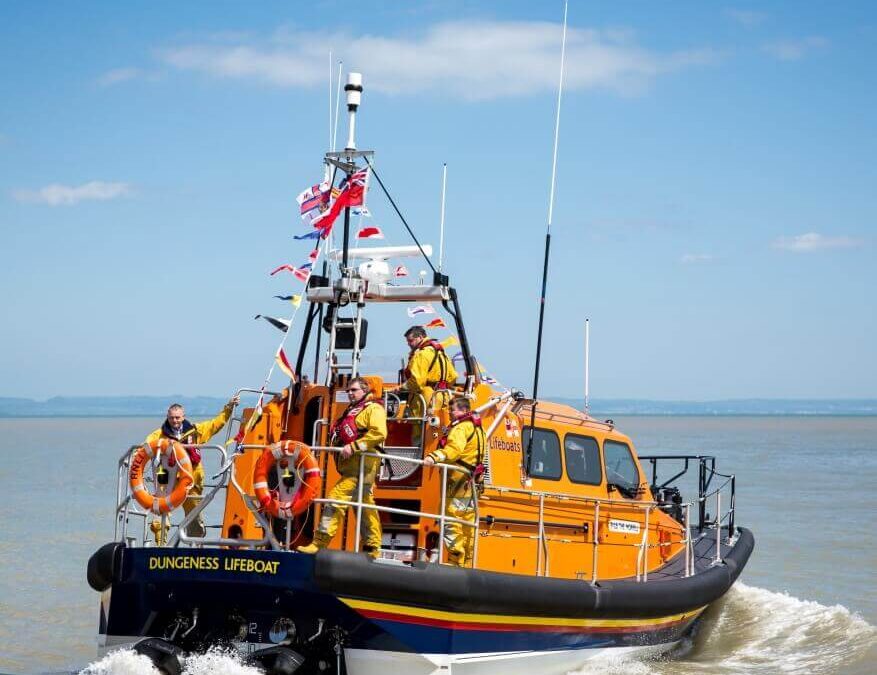 The Lifeboat, Tractor and Trailer were purchased as the result of a legacy of £6 million from the  Mrs Barbara Morrell Memorial Fund.  Mrs Jackie Simmons friend and Executor was present to hand  over the new craft to RNLI. HRH then named the Lifeboat the  The Morrell  in memory of the Morrell Family.

HRH The Princess Royal then went aboard the new craft for a Launch from the shingle beach. Following a short cruise the Lifeboat came ashore running up the beach ready to be recovered.

The Shannon class lifeboat is the first all-weather lifeboat to be propelled by twin water jets instead of propellers, making it more maneuverable and safer to operate in shallow waters, reducing the risk of damage during launch and recovery.

Capable of 25 knots, the Shannon class is 50% faster than the Mersey she replaces. Able to cope with all weathers, she is inherently self-righting in the event of a capsize.

The Shannon incorporates the very latest computer technology and is equipped with SIMS (Systems and Information Management System), which allows crew members to monitor and operate many of the boat’s functions from the safety of their seats.

The Launch and Recovery System has been developed to launch and recover the 18-tonne lifeboat from beaches, independent of slipways and harbours, in what can be extremely rugged and harsh environments. The lifeboat is launched bow first from a specially designed tractor and carriage system, and is recovered onto the carriage bow first after grounding on the beach. A unique turntable feature then rotates the lifeboat through 180°, which reduces the time and space needed to prepare for re-launch — a crucial factor if the Shannon is to receive more than one call out in a day.

The Morrell on her return (c)Nathan Williams

The operational number (ON) or build number for this lifeboat is 1309 however, the number painted on the hull of this vessel, 13-02, indicates that she is approximately 13m long and that she is the second boat built in her class.