400th Anniversary Commemoration of the Death of Pocahontas, 21st March 2017 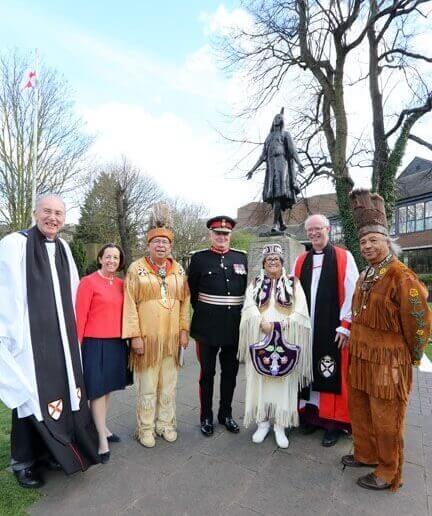 On 21st March 2017 Gravesham Borough Council held a Service in St George’s Church, Gravesend, to commemorate the death in 1617 of the native American princess Pocahontas, then aged 22 years of age, who died either on shore or aboard the ship George, which she, her son and husband, John Rolfe, had taken for a passage back to Virginia. Sadly Pocahontas had succumbed to an illness and died. Pocahontas’s remains were brought ashore and buried in the Chancel of the old St George’s Church which burned down in 1727, together with much of Gravesend.
Pocahontas was the daughter of Chief Powhatan. It is said she saved the life of Captain John Smith, who had been captured by the Native Americans near their Settlement at Jamestown. Pocahontas was herself taken hostage in 1613 and chose to live with the colonial settlers. She converted to Christianity and was baptised as Rebecca. She travelled to London with her husband and son in 1616. Pocahontas was presented to English society as an example of the “civilized savage” in the hopes of stimulating investment in the Jamestown settlement. She became something of a celebrity, was elegantly fêted, and attended a masque at Whitehall Palace in 1617, meeting King James I and Queen Anne. Pocahontas then became homesick and wished to return to Jamestown.
In 2005 Kent County Council and the Commonwealth of Virginia entered into a series of Memorandum of Understanding bringing both parties together before the 400th Anniversary of the founding of the Jamestown Settlement.  When The Queen visited Virginia in 2007, a group of Virginia Indian Chiefs met her on the steps of the Capitol in Richmond, Virginia, who were also present on 21st March 2017 at St George’s for the Service. The Statue of Pocahontas is a copy of the one on Jamestown Island and was presented to Gravesend by Governor Battle in 1927.