Diamond Jubilee Visit to Kent by The Earl and Countess of Wessex, 31st, May, 2012 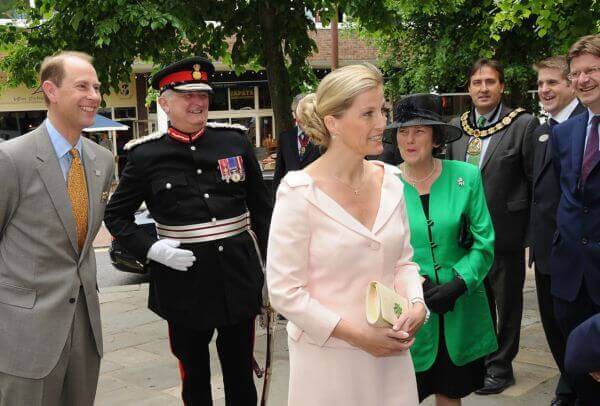 TRH The Earl and Countess of Wessex with the Lord- Lieutenant on The Pantiles, Tunbridge Wells.

TRH The Earl and Countess of Wessex were asked by The Queen to visit Kent, in her stead, as part of The Queen’s Royal Diamond Jubilee regional visits programme.

TRH programme took them to Royal Tunbridge Wells, Grove Green and Gillingham. Starting in Tunbridge Wells, where TRH toured the Pantiles, meeting many local well-wishers who lined the route, this was followed by a performance by the junior choir of Kent College, Pembury, at The Church of King Charles The Martyr. On leaving, they unveiled a plaque to commemorate their visit. The second stop was The Community Orchard at Penhurst Place, Grove Green, Maidstone, where there was a tree planting and plaque unveiling. The final stop was at Pembroke House in Gillingham, a care home run by the Royal Naval Benevolent Trust for naval ex-servicemen and women. TRH were taken on an extensive tour of the facilities; meeting residents, volunteers, trustees and staff. The Royal couple spoke, informally, with children outside Pembroke House on their departure.